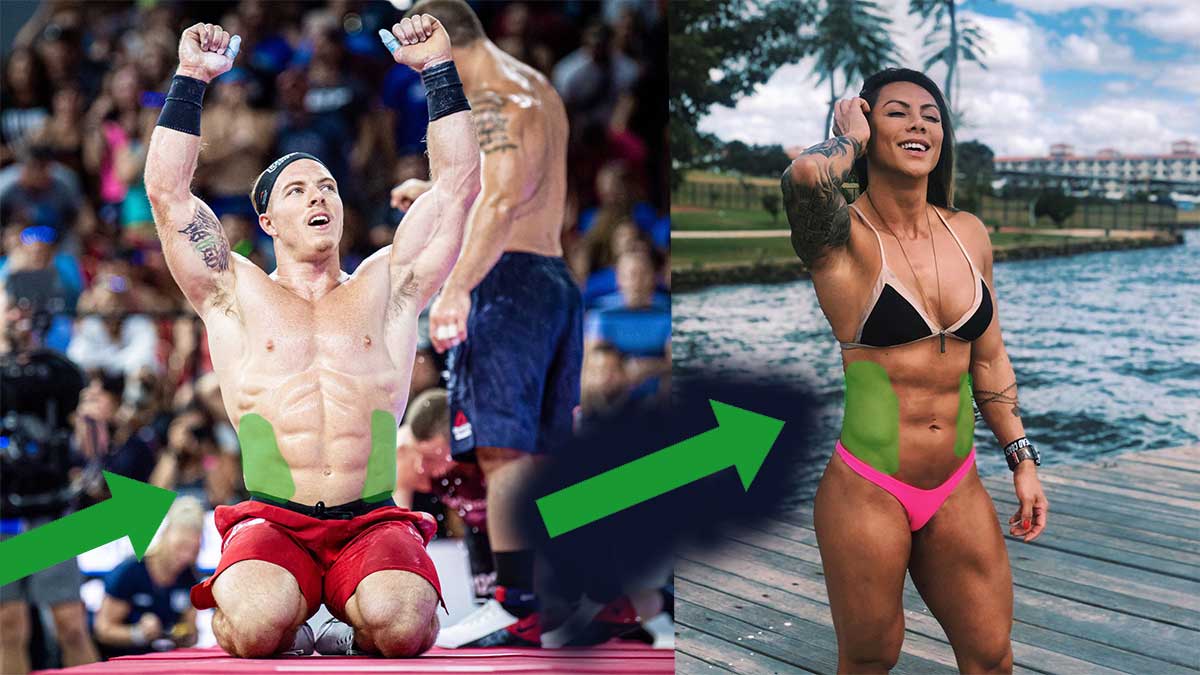 These twisting six pack abs exercises will help you build strong, powerful and good-looking oblique muscles for your body.

They have been chosen and explained by Jeremy Ethier, check out his great YouTube channel.

“One of the biggest mistakes people make with their core workout or six pack abs workout is overlooking the obliques and failing to realize their importance towards contributing to a well-developed midsection. Based on the orientation of the obliques and the way their fibers run, they can help visually taper and narrow your waistline. It would, therefore, be in your best interest to start incorporating oblique exercises into your training plan. In this video, I cover the best obliques abs exercises, such as oblique crunches and oblique twists, you need to incorporate into your obliques workout.”

“The obliques actually have 2 lesser-known functions that most people overlook: it assists in the posterior pelvic tilt and tucking the ribs down and in, and it also assists in drawing in your abdomen by bringing the belly button in towards the spine. Research, therefore, shows that by implementing these two additional functions of the obliques during your obliques workout, you’re able to achieve even greater activation.”

“One of the best obliques ab exercises is the high to low cable woodchoppers. It’s a great option as it enables us to apply weighted resistance directly in line with the diagonal way the oblique fibers run. The key here is to focus on the rotational aspect of the movement. You should minimize the use of your arms muscles by keeping your elbow position locked, rather than bending and extending them or swinging the weight down with your arms. When done properly, you should feel a strong contraction corresponding to the side of the obliques that you’re pulling towards. And for this exercise, you’ll want to implement a lower rep range of roughly 10-15 reps.”

“Next, we’ll follow this up with the bicycle crunch. This exercise has actually been shown in some EMG analyses to elicit quite high obliques activation compared to other oblique exercises. But in order to maximize the effectiveness of this exercise for the obliques, we need to ensure that we’re implementing all of the obliques functions as we perform it. And in terms of exercise execution, don’t do what most people guys and just try to touch your elbow to your knee which just ends up in form compensations.”

“Instead, remember what the obliques function to do and put your focus on simply crunching to the one side while rotating your torso. Ignore where your elbows and knees end up and instead just go as far as you’re capable of to each side while still actually feeling the obliques working during each rep. And for this exercise you should definitely use a much higher rep range of over 15 reps per side.”

“Next, we’re going to move onto twisting leg raises – one of the best oblique twists exercise variation. Now the traditional leg raise itself with no twist has actually been shown in a few EMG analyses to already provide superior obliques activation when compared to other common core exercises. To make the movement more of an oblique exercise, we can simply incorporate a twist into each rep as you come up since this will now incorporate lateral flexion and rotation of the torso into the movement. But again, just as we did with the last exercise, it’s vital that you don’t forget to incorporate the two additional functions of the obliques by moving into posterior pelvic tilt and drawing in the abdomen before you start your reps. And due to the difficulty of this exercise, a rep range of anywhere between 10-20 reps is ideal. But again, the focus needs to be on controlling and actively using your obliques every single rep.”

“As for frequency and number of sets recommendations for these movements in an oblique workout, I’d recommend throwing 3-4 sets of each of these into your current ab training. And as for your abs training, you should be doing them once to even 4 times a week, depending on how much volume you’re doing during each session. In any case, though, try out these movements and figure out which works best for you.”

“But keep in mind that picking the right core exercises to do in your oblique workout is just one part of the equation. Dialing in your nutrition and eating the right amount and types of foods are really the key to leaning down and defining that mid-section.”

Muscles of the abs and core

Together these muscles stabilize the spine and pelvis during movement.

The rectus abdominis is the most superficial muscle of the abdominal wall, with origins on the pubic bone and running vertically to insert on the lower ribs. It acts to flex the spine and draw the lower ribs up towards the thoracic cage, as well as assisting with respiration by compressing air in between its fibres.

The transversus abdominis is the deepest abdominal muscle. It originates from the inner surfaces of the lower eight ribs, and inserts into the rectus sheath, which covers the upper part of your abdominals.

The main function of this muscle is to help compress and stabilize your abdominal cavity when you breathe in, or when you have a belt around it (think about that for a minute). This helps to support all other muscles that surround, protect and move your spine.

Because it’s so deep inside your body, its shape changes very little as you contract it.

The external obliques are the outermost muscle of the core. These muscles are responsible for side bends, rotation, flexion and extension of your spine, as well as lateral flexion.

They do this by contracting across multiple joints: when they contract, they bend to your side, rotate your body to that side, flex and extend (bend forward or backward) your spine on that side and also laterally flex (twist) your midsection toward that same side.

The quadratus lumborum (QL) is a muscle that crosses from the pelvis to the spine and connects the lower back with the hip. The QL helps stabilize your spine, which is especially important for lifting heavy objects like furniture or tools. It also works with other muscles to lift your torso when you do sit-ups.

You can strengthen this muscle by doing sit-ups in a slow, controlled manner, rather than bouncing up and down quickly as some gym workouts recommend.

The psoas major is a powerful hip flexor that connects the lumbar spine to the femur. It also supports internal rotation of the hip, which is part of its function in walking or running. Because it is responsible for so many different movements, this muscle can be prone to injury if you do not properly warm up before exercising.

To perform an effective core workout, you should use multiple muscles simultaneously as well as isolate them one-by-one with specific exercises. The following list includes some examples:

There are more muscle groups than just the “6 pack”

There are more muscle groups than just the “6 pack” in your abdominal area. The rectus abdominis is part of a larger group called the transversus abdominis, which also includes the internal obliques and quadratus lumborum. When you exercise these muscles together, you’ll notice a difference in appearance and function compared to exercising one single muscle or two separate muscles at once.

In order to effectively target all of these areas during exercises, it’s important to understand how they work together—and why it’s important for them to do so.

The core is a complex set of muscles, but it’s important to know what each one does. By understanding the function of these different groups, you can better train your abs and core to get the results you’re looking for.

Add the twisting six pack abs exercises from this article into your training and optimise your strength, posture and physique.