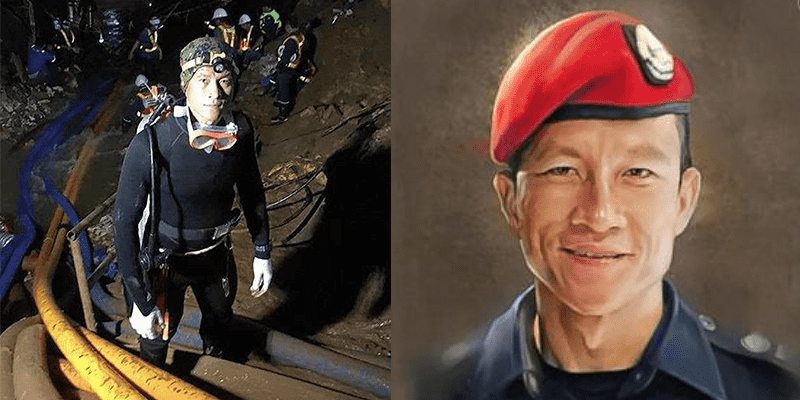 He died so they might live. 🕊 As cave rescue operations in Thailand progress, we remember Saman Gunan, the former navy diver who died while taking part in efforts to rescue the 12 trapped boys and their football coach. Click on the link in our bio 👆 to read more about his heroic life.

A workout to honour the hero of Tham Luang, Saman Kuman

CrossFit has a tradition of honoring fallen heroes who have died while saving others. This workout will be done to honor retired Thai Navy SEAL and Petty Office First Class Saman Kunan.

Khun Saman died while diving through a flooded cave (Tham Luang) supplying air tanks to a group of 12 young students and their coach who were trapped 3.2 kilometers into the flooded cave. He successfully delivered the tanks, but died on the return dive on July 6.

Khun Saman was 38 years old, and volunteered for the mission to rescue the boys. The rescue involved dozens of people from many different countries, with a very dangerous and complex rescue into a flooded cave with extremely narrow passages.

All of the children and their coach were successfully rescued.

The first video of the rescued Thai boys recovering in hospital has been released. Tap the link in our bio ☝️ to find out fresh details about their dramatic rescue from a flooded cave. Several boys can be seen in hospital wearing facemasks and gowns, at least one giving a victory sign for the camera. #thailand #WildBoars #rescue #cave #bbcnews

Khun Saman’s widow, Waleeporn Kunan told the BBC “Saman once said we never knew when we would die. We can’t control that, so we need to cherish every day.”

CrossFit Hero WODs are designed to reflect the person and their mission.

Add this workout into your training and take the time to honour a truly brave man.