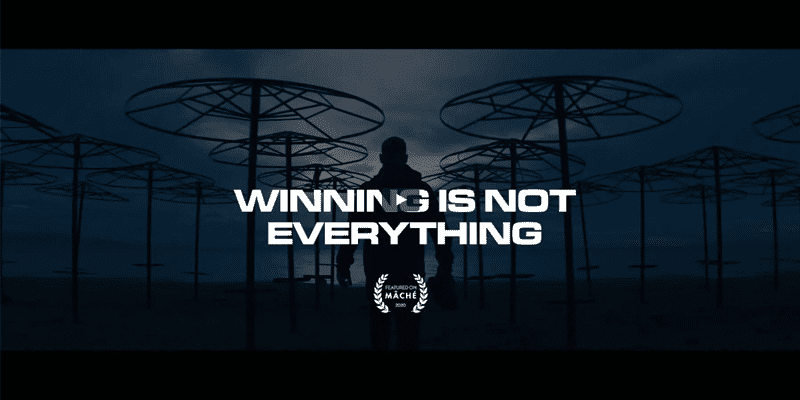 Winning is not Everything is a short movie depicting Greek athlete Dimitris Fotiou and his struggles and successes on his journey to being a professional CrossFit athlete.

BEHIND THE SHORT MOVIE

While being a top-seeded tennis player competing at a national level, I entered the Informatics Department at the University of Athens. Two years later and after attending a short course on film directing, I decided to quit university and follow my love for filmmaking and the moving image.

I started working as a 1st AD and editor in TV commercials and short films while at the same time doing double shifts as a tennis coach.

I had already been training CrossFit for about a year when a friend suggested attending Madhall, where I met Dimitris.

My passion for tennis and sports in general made me very interested in the stories of accomplished athletes, as well as in the mentality and psychology behind their preparation and performance for and in big events, as it was something I had been through myself in the past.

When Dimitris told me he would compete at the 2020 Open, it was a no-brainier for me: I had to tell his story. The story of an athlete and his struggle being a pro athlete in a sport that receives literally no funding or attention by the Greek state.

“Winning Is Not Everything” was shot during four long days in-between Dimitris’ training sessions in different gyms and boxes, as well as parts of his everyday life at home.

Shot on location on RED Dragon and Super 8mm film.

Well before joining CrossFit, I was a professional footballer for several years but, after a serious injury, I decided to withdraw. A year later, in 2012, I realized CrossFit was love at first sight.

Since 2015 I own and run Madhall CrossFit, a gym specialized in initiating and preparing CrossFit athletes for either big or small athletic events. Ιt’s a blessing for me to be able to train people and do what really pleases and fills me.

The biggest highlights of my career are the qualification and participation in the 2018 Regionals, as well as the 71st place worldwide in the 2019 Open. This year I came close but failed to fulfil my desire to participate in the CrossFit Games, as I ended my qualification for the World Open in 48th place.

At this point, I would like to mention NKprogramming, my coach; I could not be more grateful for his valuable help and assistance as, without him, the CrossFit Games would just be an unreachable dream.

6 Ways to Improve Discipline for Crossfit Training (and Life)

7 Essential Back Exercises to Build Strength, Muscle and Power for CrossFit