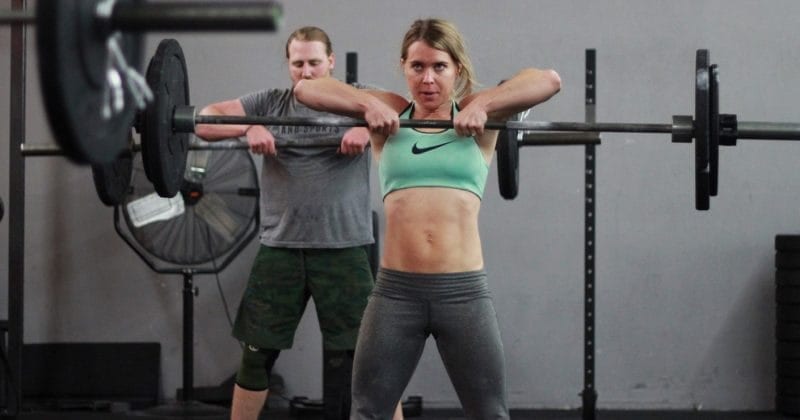 This exercise is an explosive hinge movement that creates great momentum in the barbell and makes it easier to pull. The sumo deadlift high pull is invaluable for learning to transfer power from the hips and legs, through the upper body, and into the object being lifted with maximal efficiency.

Part of the nine foundational movements of CrossFit, the sumo deadlift high pull proves to be a very useful conditioning tool with its large range of motion, significant contribution from most major muscle groups, and the potential for fast cycle time.

What is a sumo deadlift high pull

The sumo deadlift high pull starts with a conventional deadlift with a wider stance (sumo deadlift) and requires the athlete to move the load (usually a bar or kettlebell) from shins to chin, keeping the elbows high.

Using a sumo deadlift stance and grip, stand until the barbell gets to mid/upper thigh height. Without stopping the upward momentum of the bar, violently extend the knees and hips. Finish the movement by flexing the elbows, pulling the barbell upwards until it reaches neck height. Elbows should sit above the bar at the end of the movement. The knees and hips must extend before the arms ever bend.

“For range of motion, line of action, and length and speed of action, the Sumo Deadlift High Pull is a great conjugate to the ‘Thurster’. At low loads this is our favourite substitute for Concept II Rowing,” says the CrossFit’s Journal Moves Guide.

This is a great travel or home workout, as it requires little equipment and can be completed pretty much anywhere.

In this workout you move from each of five stations after a minute.The clock does not reset or stop between exercises. This is a five-minute round from which a one-minute break is allowed before repeating. On call of “rotate”, the athletes must move to next station immediately for best score. One point is given for each rep, except on the rower where each calorie is one point.

Fight Gone Bad is one of the CrossFit benchmark WODs. It was designed to simulate the time domain of a mixed martial arts bout of five minutes of work followed by one minute of rest.