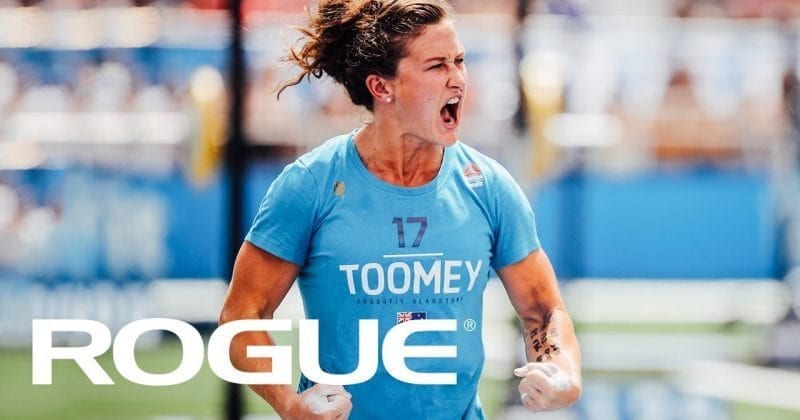 The second edition of the Rogue Invitational, while fundamentally different to the first, was an equal success.

Rogue was able to run the competition entirely online, with participating athletes in over 30 locations all around the world.

Athletes were filmed from their chosen location and Rogue put together a comprehensive live broadcast from each individual stream. It was the first competition in over three months and, given the circumstances, ran incredibly smoothly and was great fun to watch.

With athletes competing at the same time around the world, they had no idea where their fellow competitors were during the workouts. For competitors, there were no spectator crowds, no fancy stadium floor and no athletes around to pace against. This meant maximum efforts were seen on every event.

“The @rogueinvitational was something else, the first workout was so weird in the silence but it got better right away in the second workout,” said Thuri Helgadottir of the event.

Tia Toomey and Pat Vellner won the Rogue Invitational in a dominating fashion. They were both awarded $50,000 for the feat, plus $5,000 for every event win (three and two respectively).

Rogue offers one of the biggest prize purses of the CrossFit competitive season, with a total prize purse of over $375,000.

Every athlete that competes in the 2020 Rogue Invitational will take home a cash prize, with the winners of the male and female division taking home $50,000 each. Be sure to tune in this weekend – live coverage kicks off with the Rogue Iron Game at 9:30am EDT on June 13th. #rogueinvitational #ryourogue

Mat Fraser and Kari Pearce both withdrew from competition due to injury.

The whole event was incredibly exciting to spectate, especially on the female side.

Event 4 of the 2020 Rogue Invitational presented by @goruck is starting now! Watch live for free at the link in our bio or on the Rogue Fitness YouTube channel. #rogueinvitational #ryourogue

After 14 rounds of weight increases, during which the women started to slowly drop off, the competition came down to Laura Horvath and Tia Toomey. Horvath missed her lift at 265lb and Tia was successful, winning so the event.

However, it seemed like she wasn’t sure whether she’d have to lift again or not.

Just to be sure, she upped the weight to 270lb (heavier than her winning lift during the CrossFit Games Clean Ladder) and seemed to effortlessly lift the barbell, making a dominant statement.

Worth noting: Australian athlete Kara Saunders was competing from her home gym, which meant she tackled the Rogue Invitational events between midnight and 7am local time.

These last 2 days have been, W.O.W! I’m not surprised @roguefitness pulled off the @rogueinvitational online competition that allowed us to compete live against the best in the world from our very own gyms all over the world and in completely different time zones. This was an absolutely incredible experience. I missed competing alongside my competitors but instead we were faced with other challenges that put us outside our comfort zone and were able to put our hard work to the test. For me, the past two days wouldn’t have been possible without the support from the community @calfkillerathletics @jacquimims for being my operations manager @joecotter for being my incredible judge and @shaneorr01 for doing everything for me. 😘 THANK-YOU so much to everyone that was involved in making this happen, especially after COVID-19 and having the most uncertain season. This is what we needed and I am so grateful for this opportunity. THANK-YOU EVERYONE! 💋 #RYOUROGUE #community #competition #grateful #fitness

“In her mind, she’s still surrounded by 10 athletes who are still to put the barbell down,” was noted during the live feed as she continued to push herself alone.

Sara Sigmundsdóttir, who finished second, completed 175 reps in the event.

@bicepslikebriggs lives up to her name completing 211 snatches in Event 2b Tune in now to watch the Men take on Event 2a and 2b! #rogueinvitational #ryourogue

Outside of Toomey’s dominance, the female competition was incredibly close for the top six ladies throughout the weekend. Only a handful of points separated third and fourth place, as well as fifth and sixth place, going into the final event.

2020 Rogue Invitational Final Results. The competition looked a little different this year, but the athletes rose to the occasion proving you don’t need a roaring crowd or a stadium floor to make a memorable event. Thank you to all of the athletes, our partners and to everybody watching this weekend. #rogueinvitational #ryourogue

Highlight from the weekend was the speed in which Björgvin Karl Guðmundsson tackled Event 5, finishing a whole minute (13:55.28) ahead of second place, Pat Vellner (14:55.28).

Event 5 of the 2020 Rogue Invitational presented by @concept2inc is starting now! Watch live for free at the link in our bio or on the Rogue Fitness YouTube channel. #rogueinvitational #ryourogue

Pat Vellner, who last year finished second behind Mat Fraser, ran away with the title this year.

Rogue Invitational: Toomey And Vellner Lead After Day One

Catch up on all the action here: