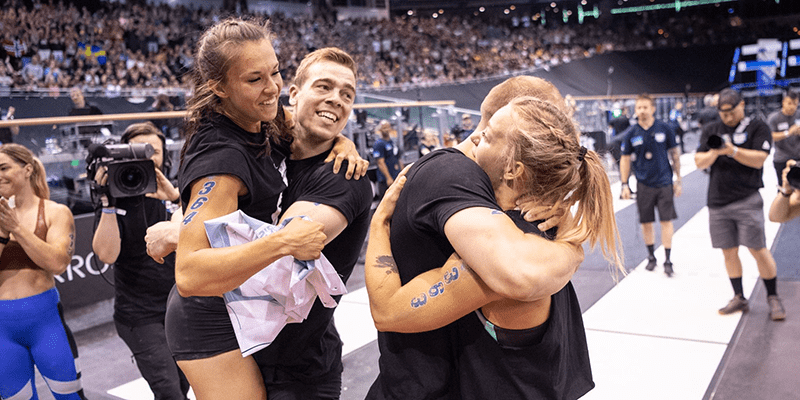 Learn how you can compete as a team in CrossFit.

“The whole is greater than the sum of its parts” – Aristotle, metaphysical.

This saying holds very true in a team setting, no one athlete is greater than the whole team and this concept should be the basis of forming any competitive team.

The greatest advice I will give to any forming team is this:

Communication in a team is like breathing in life.

This year The Progrm had two teams qualify for The 2018 CrossFit Games (Butchers Lab and Rx Performance). These teams weren’t formed as “super teams”, they were formed from two groups of athletes that train together all with the same goal in mind.

What a weekend – two teams qualifying for the 2018 CrossFit Games 🤩. @rxperformance.no @teambutchers ⠀⠀⠀ ⠀⠀⠀⠀ Get ready for a fun few months 👊🏻. • If you're interested in The Progrm we offer a 7 day free trial. Link in Bio 👊🏻. • #TheProgrm #Europeiscoming #EuropeRegionals #GamesBound

One thing that is most apparent about these teams is that the foundational communication and shared group goal is what make them great, every decision is based off what is best for the team because they all understand this goal.

On the other hand I have seen and been involved with teams who despite achieving their goals are left upset, unhappy and generally dissatisfied. Usually it comes down to one or some of the athletes not sharing the same vision and trying to turn the team into achieving their individual goals, not that of the team.

So before even thinking about forming a team and the physical qualities needed by each individual athlete, clarifying these foundations and identifying everyones goals should be the primary objective.

Below is a useful set of questions for each team member to answer:

Obviously be realistic in your answers and try to expand on each answer (Think 1 paragraph for the general questions, not just a sentence). Keep the answers in writing, so that everyone can be held accountable to their actions should any confusion arise later on. Also if someone doesn ́t want to be on the team, forcing them to be is probably not the right route…

Compete as a Team in CrossFit – The Practicalities:

How many times a week to train together?

The vast majority of athletes have commitments outside of work, therefore expecting the team to train together each day is usually unrealistic. For our teams we usually include 3 days individual programming, 1 day active recovery and 1 – 2 days team programming. This allows for individual self development and training, but also ensuring the team does meet twice during the week to get to work together. Obviously this is best throughout the year to develop the team.

Preparing for the unknown

Just as with individual competition, teams also have very little idea what they will be expected to compete in. In fact some could argue they know even less as there are more options available and also the workouts are usually released later.

Therefore one of the biggest aspects The Progrm provides in its programming is ensuring that an element of communication during the session is always essential to getting a good time. As once again this is the foundation of a good team.

If you are used to training in an individual environment then the switch to team can be hard, especially if you do want to ultimately compete individually.

However if you are in a place to compete on a team and be in a position to possibly sacrifice your own goals for the greater good of the team then it can be an amazing journey.

Sometimes individual competition is lonely, however on a team being able to share that journey together creates quite amazing shared experiences:

“Happiness is Only Real When Shared” – Christopher McCandless.

Coaching an individual and coaching a team are 2 very unique skill sets.

Personally I enjoy the dynamic of working with teams and focusing on developing a group as a whole and it is going to be great to see some of The Progrm teams throwing down at this years CrossFit Games.

If you are interested to find out about how The Progrm can help your team develop for next season please send an e-mail to: info@theprogrm.com