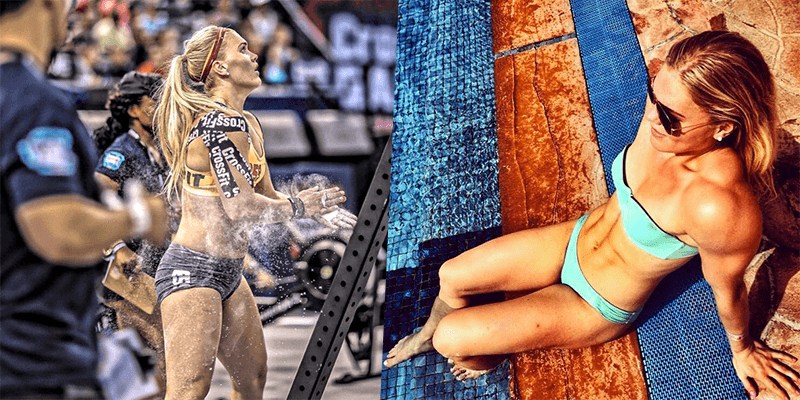 ◄ Back
Next ►
Picture 1 of 10
Sara Sigmundsdottir (born 12 September 1992) is well known for being one of the best female Crossfitters on the planet! She has consistently performed at the highest level in the Sport, securing two third place finishes at the CrossFit Games so far.

Annie Thorisdottir, Katrin Davidsdottir, Sara Sigmundsdottir and Thuridur Helgadottir: four Icelandic ladies dominating the biggest Crossfit stages of all. However, they are not the only ‘dottirs’ to watch at major events of the discipline, as there is a constant flow of elite sportswomen coming to Crossfit fame from the land of volcanoes, geysers…and impressive athletic success stories. To every fan of Strongman, Crossfit, handball, basketball, and, more recently, after the European Championship of 2016, football, the ability of a country with a population of just 323,000 to select and train athletes who go on to feature among the world’s best is a cause for awe and admiration.

The question comes naturally: what lies behind these unlikely accomplishments? In this article, while focusing on Crossfit and Strongman, we set out to explore the different possible factors which contribute to Iceland’s important place in the world of sport.

It is often believed that the genetic set-up of the Nordic people explains their physical strength and mental toughness, two key ingredients for achievements in sport. However, as few to no studies have been carried out regarding this matter, it is difficult to determine the extent to which genetics offer Icelandic sportsmen and sportswomen a physical or psychological advantage over their competitors. The aforementioned argument is based on the infamous force and brutality of the Icelanders’ ancestors, the Vikings, who settled on the island in the year 874. Vikings were a tough people, who enjoyed strength training in the form of outdoor sports such as competitive stone lifting. This pastime and its adapted versions seem to have remained popular in Iceland throughout the ages, and could be regarded as part of the Vikings’ cultural legacy.

However, the environment is an adversary and an ally of the Icelanders at the same time, as it also provides them with clean water and a cuisine based on local fish, vegetables and dairy products. Fully powered by geothermal and hydroelectric energy, Iceland is one of the least polluted countries in the world, which positively influences the quality of water and crops. Given the importance of a sportsperson’s diet as a factor determining athletic performance, the healthy food products available in Iceland may also be contributing to the achievements of Iceland’s Crossfit dottirs.

Besides endurance and mental toughness, another psychological trait strongly influenced by geographical and historical factors and also believed to have been inherited from the Vikings is hard work. The efforts related to regularly coping with natural disasters and harsh living conditions shaped the personality of the Icelandic people, who have learned to overcome difficulties and thrive in an unfriendly environment. Icelanders start working at an early age, encouraged by the country’s government, which organizes summer jobs for teenagers aged 13-15. It is usual for students to work part-time during their studies, while many adults have more than one job.

A second trait displayed by Icelandic Crossfitters and other athletes is ambition. If we were to refer to the Viking ancestors again, it is fair to say that they were no cowards lacking self-confidence.

Sport is very popular in Iceland in both its amateur and professional forms. From a young age, pupils are encouraged to actively engage in exercise, among others with the help of Skólahreysti, a competition between schools. The fitness culture in particular is very well-developed, and Crossfit occupies a central position. Icelanders of all ages are active in the discipline at various levels, inspired by the success of the country’s Crossfit superstars.

Boxes face constant demand, with classes at the famous box Crossfit Reykjavik starting every 20 or 30 minutes. Furthermore, there is intense competition, but also collaboration, between Icelandic boxes, as Helga Gudmundsdottir, the owner of Crossfit Hafnarfjörður mentions in our interview with her: We have connections to most of the boxes in Iceland. Iceland is a very small country and we are all starting to know one another. It is like a one big family. We are all happy to lend out gear for competitions or events. So it´s a community and all boxes are connected somehow.

Another example which illustrates the importance of sport in Iceland is the context in which Junior Nordic champion in Olympic Weightlifting Freyja Mist Olafsdottir decided to take up Crossfit: on Iceland’s National Holiday, various sports were being showcased downtown. The Crossfit Reykjavík Regional and Games competitors represented Crossfit and they were doing stuff like pull ups, handstand push-ups and muscle ups, and I thought it looked so cool to be able to do all of those things so I signed up right away.

Besides Crossfit, another popular discipline promoting Icelandic sport nationally and internationally is Strongman. The country gave the world two four-time Strongest Men, Jon Pall Sigmarsson and Magnus Ver Magnusson, and is now home to Europe’s Strongest Man, Hafthor Julius Björnsson, also known in popular culture for his role in the Game of Thrones series. Considering its ongoing popularity, Strongman seems to have established itself as a traditional Icelandic discipline. Furthermore, Strongmen and Crossfiters sometimes train together and assist one another in making progress, and it is likely that the renowned Strongman discipline plays a part in the achievements of Crossfit athletes from Iceland.

Now that we have looked at some possible answers to the question regarding Iceland’s achievements in international sport, it is time to turn our attention to a very visible pattern which has emerged in Crossfit, namely the domination of Icelandic ladies. While the sport is probably just as popular among the men of Iceland, also yielding significant results (Björgvin Karl Guðmundsson came in 3rd at the 2015 CrossFit Games), it is in the women’s category that the country celebrates its biggest and most numerous successes. Why is it so?

To explain this, we must focus on the principle of gender equality, which has a long history in Iceland. Women are known to have enjoyed many rights and liberties in the times of the Vikings. Furthermore, female warriors known as shieldmaidens are often mentioned in Scandinavian folklore and mythology, leading to the assumption that Viking women accompanied the men on the battlefront. In 1980, Iceland was the first country to democratically elect a woman as its head of state, while in March 2017 it celebrated Women’s Day by becoming the first to require gender pay equality. It is therefore no surprise that the island constantly tops the ranking in the Global Gender Gap Report.

When it comes to sport in general and Crossfit in particular, this is reflected in the general attitude of Icelanders towards what is generally considered appropriate or desirable for women to do or look like. There is nothing unusual about Icelandic women taking up Crossfit, and it may well be that they do so without fear of being judged or body-shamed. In turn, together with the previously mentioned physical and psychological attributes, a large number of active female Crossfitters leads to a higher chance for the country to produce top sportswomen. Of course, the example set by Annie Thorisdottir and the others plays an important role as well.

Combining sport with social, cultural and historical facts or even genetic backgrounds, the question of explaining a country’s domination in a certain discipline is fascinating and puzzling at the same time. Although it is impossible to determine the accuracy of the answers and despite the fact that the matter usually remains unresolved, the feats achieved by a nation’s athletes in a certain discipline, such as those of small but mighty Iceland’s dottirs in Crossfit, are sure to inspire and motivate current and future generations of sports enthusiasts worldwide.