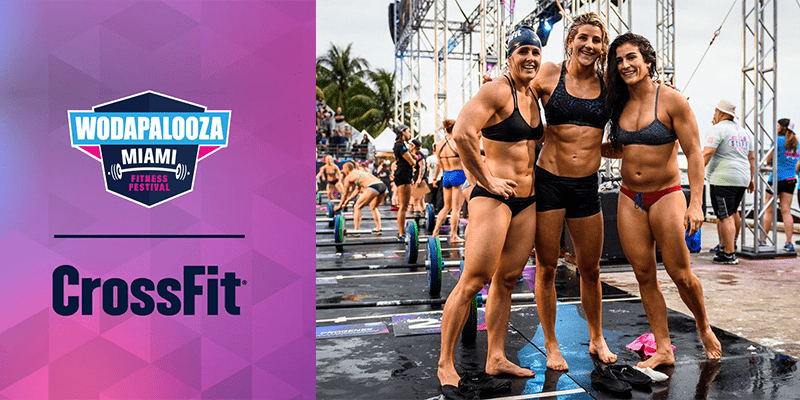 SCOTTS VALLEY, Calif., Oct. 1, 2018 /PRNewswire/ — CrossFit, Inc. today announced that Wodapalooza, a global fitness festival and inclusive competition, is joining the roster as the 7th event to be sanctioned by CrossFit. In 2019, Wodapalooza’s top male and female individual competitors, as well as the top four-person team, will qualify to the Reebok CrossFit Games in Madison, Wisconsin. The much-anticipated announcement recognizes Wodapalooza’s history as a popular, diverse, and community-driven festival. Wodapalooza is the latest community-based competition to join the growing ranks of newly-sanctioned CrossFit competitive events around the globe.

The heart of Wodapalooza lies with the community. ⠀⠀⠀⠀⠀⠀⠀⠀⠀ We’re proud to announce our partnership with CrossFit as an official sanctioned event, where we will continue to CELEBRATE FITNESS. COMMUNITY. LIFE. ⠀⠀⠀⠀⠀⠀⠀⠀⠀ Our goal remains the same: to provide an unparalleled experience, with a focus on creating life-long lasting memories for our athletes, volunteers, partners, & spectators. ⠀⠀⠀⠀⠀⠀⠀⠀⠀ Read the press release & sign up for the #WZAOC at our link in our bio. ⠀⠀⠀⠀⠀⠀⠀⠀⠀ #WZAMiami #CrossFitGames #CrossFit @crossfit @crossfitgames @loud_live

The Wodapalooza Fitness Festival takes place every January in Miami, Florida, and has become a popular destination for the CrossFit community. “Wodapalooza brings its distinctive character and culture to the CrossFit Games season,” said CrossFit founder and Chairman Greg Glassman. “They figured out that Miami in winter – sun, bathing suits, balconies, and bright lights at night – is a world-class destination for showcasing the fittest and healthiest people on earth. It’s a party.”

“It’s not just about fitness.” What does WZA mean to you? ⠀⠀⠀⠀⠀⠀⠀⠀⠀ @dannyxsoul talks about our “ecosystem” in Miami. Join us in January.

Wodapalooza attracts tens of thousands of attendees from all over the world each year to participate in and watch their fellow athletes compete across 40 different competitive divisions, including the world’s most elite. “This partnership represents a new chapter in our history, and we look forward to working with CrossFit to continue bringing our partners, spectators, and competing athletes an unforgettable event and competition in January,” said Matt O’Keefe, President of Loud and Live Sports (a division of Loud and Live, Inc., owner of Wodapalooza).

@fearlessmiranda says it best when talking about “doing the workouts with a huge community.” ⠀⠀⠀⠀⠀⠀⠀⠀⠀ Join our WZA community by registering for the Online Challenge and Qualifier with the link in our bio!

The Wodapalooza CrossFit competition is open to all athletes and kicks off this week with their online challenge and qualifier. As with all CrossFit-sanctioned events in the 2019 Games season, should the top male or female athlete at Wodapalooza qualify for the CrossFit Games by other means, then the number two podium finisher will receive a Games invitation. Athletes can qualify for the 2019 CrossFit Games via four paths: (1) winning their country’s national championship as determined by the worldwide CrossFit Open; (2) taking first-place at a CrossFit-sanctioned event; (3) placing within the top twenty finishers in the 2019 CrossFit Open; (4) or participating as one of four at-large athletes selected by CrossFit, Inc.

#tbt WZA 2013. When was your first WZA? How many have you been to?
⠀⠀⠀⠀⠀⠀⠀⠀⠀
We're on our way to celebrating 8 straight years! Want to be part of it? First step is joining in on the Online Challenge and Qualifier. Link in bio!

Wodapalooza is not only a fitness competition, but also a celebration of the CrossFit community’s unique commitment to health and fitness. This year, thousands of participants and attendees from around the world will have the opportunity both to compete in a newly-sanctioned event and to experience, learn, and take part in a broad range of festival activities, including live music, workshops, seminars, and other educational and participatory events.