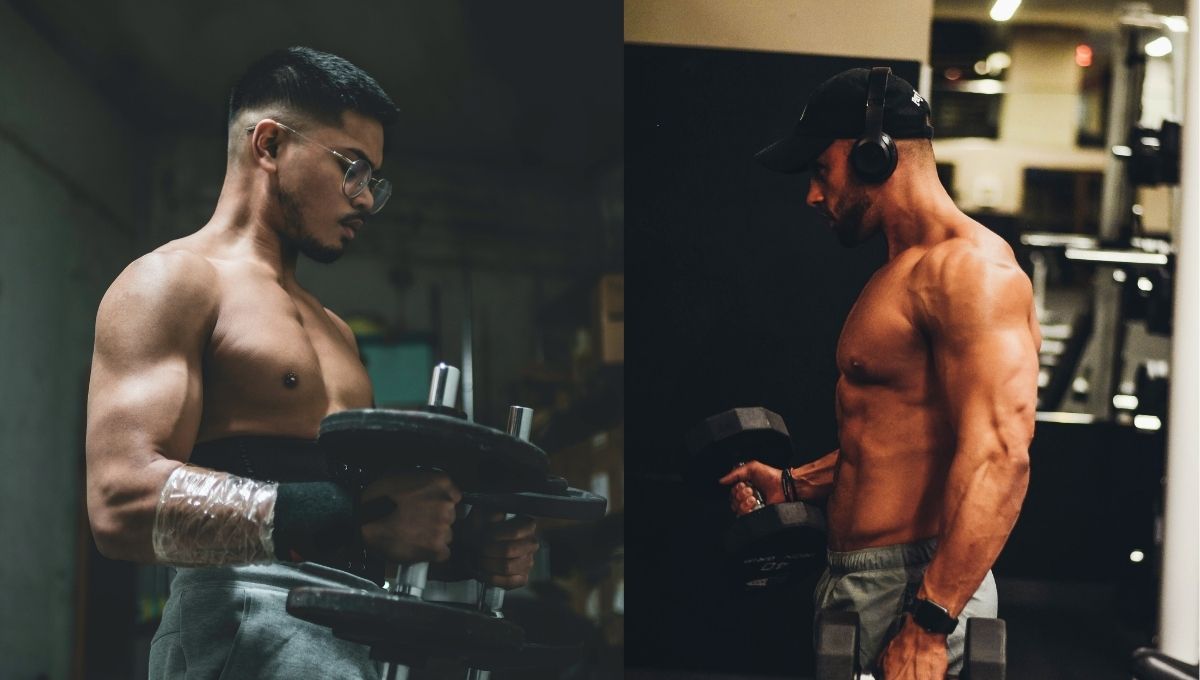 This article will explain all the excellent benefits of the bicep hammer curl, including why it should find a home within your training plan.

What is the Bicep Hammer Curl?

Compound exercises provide more bang for your buck than an isolation movement like bicep curls or triceps dips because they require stabilizers such as core muscles to work effectively.

Benefits of the Bicep Hammer Curl

Find out why you need to perform it more often.

1. Builds out the Overall Size of your Biceps

Bicep hammer curls are a great way to build out the overall size of your biceps.

You do them with dumbbells, which enables you to work on arms individually, as well as isolate and destroy any weaknesses or strength imbalances you may have.

They are an excellent and effective movement when it comes to hypertrophy of the arms.

2. Benefits of the Bicep Hammer Curl – Increases Strength in your Forearms

If you’ve ever tried to curl a dumbbell with just your arms, you know that it takes a ton of effort to lift the weight.

The bicep hammer curl works because it also uses the forearms and wrists to stabilize, control and lift the weight. This also means that when you finish performing this exercise, your forearms will be even stronger!

Grip strength is important for many activities, and the bicep hammer curl is an effective way to build grip strength.

Grip strength is pertinent for sports and everyday life because it can prevent injury and help you accomplish tasks more easily. Grip strength also allows individuals to maintain independence, as we use it to do things such as hold a cup of coffee or open a door handle.

The Bicep Hammer Curl works the biceps and triceps muscles. The biceps are a muscle group with two heads, but the triceps are made up of three muscles: the upper, middle, and lower portions of the muscle.

It also works the forearms and grip. Overall, it requires a greater sum total of muscle groups to work together. As a result it also develops a higher number of muscles.

Traditional dumbbell concentration or barbell curls isolate the biceps to a greater degree, but if you want to work more muscles harder, then the hammer bicep curl is a great choice.

5. Benefits of the Bicep Hammer Curl – Can Be Performed Standing or Seated

The bicep hammer curl can be performed standing or seated. This gives you plenty of options depending on your goals and equipment.

The seated variation is even harder to cheat, and more difficult to recruit stabilising power form the core of your body.

Both are highly effective.

6. Benefits of the Bicep Hammer Curl – Doesn’t Need Much Space

The bicep hammer curl can be done in a small space and doesn’t require much equipment, making it easy for you to work out at home or at the gym, no matter where you are.

You can even do it wherever you have access to dumbbells.

The biceps brachii are a pair of muscles that are located on the upper arm and shoulder. There is also a smaller muscle known as the brachialis, which lies underneath the biceps and assists in contraction.

The brachioradialis, coracobrachialis and pectoralis major muscles all assist with this movement.

The hammer curl is an isolation exercise used to strengthen your biceps muscles by using only one arm at a time to perform repetitions. It’s important to note that proper form is essential when performing this exercise so you can avoid injury and continue training without pain or discomfort!

The triceps brachii helps you in many activities, including sports like baseball and swimming where you need to lift or push something with your arms.

When performing bicep hammer curls, you are using your biceps as well as another set of muscles called forearm flexors. These muscles allow you to bend your elbows and move them toward your body or away from it towards an extended position—like when you’re picking up something heavy at work!

The more trained these two sets of muscles are—your biceps AND forearm flexors—the less likely they’ll be injured during workouts or other repetitive movements done throughout daily life (like lifting groceries).

Muscles of the Forearms

The forearm is made up of two main muscle groups: the flexor carpi ulnaris and the flexor carpi radialis. These muscles are responsible for flexing the wrist, as well as turning your palm up or down. In addition to these roles, they also aid in stabilizing your hand when gripping objects such as a hammer.

With a little practice, the bicep hammer curl can be an effective exercise for building your biceps and improving your grip strength.

This exercise also works your forearm muscles, which are often neglected by many people who focus on their upper body strength. While it may take some time to master this technique, it’s worth it because the benefits are numerous and include increased muscle mass along with improved forearm development.