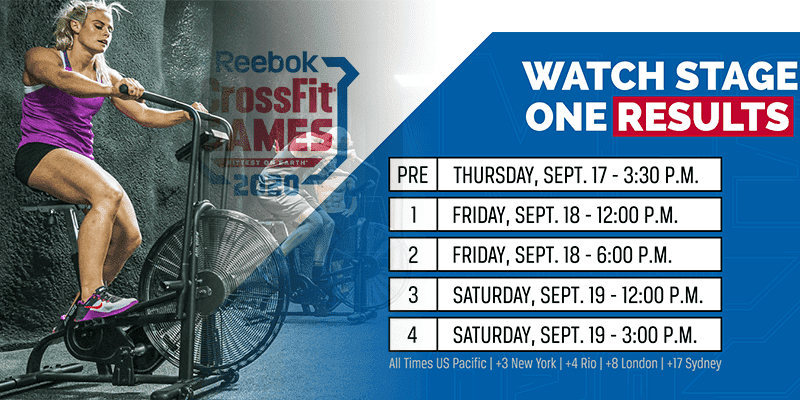 The 2020 CrossFit Games are scheduled to kick off on Friday September 18 and run for two days. Sixty athletes will compete from their local affiliates or garage gyms across 15 countries around the world.

The 2020 Reebok CrossFit Games will separate the event into two stages: an online competition in athletes’ home countries from which the top five men and top five women will advance and an in-person finals in California to crown the Fittest Man and Fittest Woman on Earth.

The 60 competing athletes from Stage 1 are comprised of the top 20 women and top 20 men from the Open leaderboard along with the 10 women’s and 10 men’s qualifiers from Sanctionals.

They will all compete in a virtual competition beginning Friday, Sept. 18.

2020 CrossFit Games Line-Up – Who Is Competing?

There are four three-hour windows in which athletes will be able to compete starting from Friday morning, September 18, and finishing on Saturday September 19 at 3PM PT.

These time blocks in which athletes are allowed to compete are set in each athlete’s time zone. Live shows with results and highlights are scheduled at the very end of each of the competing windows.

The scores of each athlete won’t be published until the end of each time block, when all athletes are done competing, to prevent unfair advantages.

Every athlete will be judged in person by an experienced member of CrossFit’s Seminar Staff and can only perform each workout once.

The CrossFit Games begin in eight days. Coverage of Stage One starts Thursday, Sept. 17, at 3:30 p.m. PT/10:30 p.m. GMT. @CrossFit will go live from its studio in California, to guide fans through an action-packed weekend of competition. Tune in for live updates on event results on Games.CrossFit.com. @reporternicole and @swoodland53 will keep you informed as scores roll in and standings are released on the CrossFit Games Leaderboard. Learn more details about Stage One through the link in bio. Games.CrossFit.com #CrossFitGames #CrossFit #Fitness #Workout #Training #Sports #FittestonEarth #committedtocrossfit

Event videos recorded by all 60 athletes will be posted shortly after each workout window closes.

All events, as well as the number of tests, are still secret to deter the athletes from practising and strategizing for them too long in advance.

The 2020 CrossFit Games leaderboard will be updated during the times noted above.

This first stage will determine final placements and prize money for Games winners from 6th to 30th place. The top five men and women will then be invited to compete in Aromas, California, in the CrossFit Games in-person finals set for October 19-25.

More than US$500K in prize money is on the line for athletes placing in 20th through sixth place in stage one.

How to watch the 2020 CrossFit Games

CrossFit will air five shows for the first stage of the 2020 CrossFit Games. There will be a preview show and four live results shows from CrossFit’s studio in California – these can be watched on games.crossfit.com starting on Thursday, September 17 at 3:30 p.m. PT/10:30 p.m. GMT.

The shows will be hosted by Niki Brazier and Sean Woodland, who will share updates and highlights as scores roll in and standings are released on the leaderboard. Guest analysts and hosts from around CrossFit’s global community will also take part in the shows.

By the end of Saturday September 19 results should be out and the top five athletes who’ll head to the CrossFit Games Finals in October will have been decided.

The wait is almost over.  Stage one of the CrossFit Games is less than 10 days away. Coverage begins at 3:30 p.m. PT on Thursday, Sept. 17 on Games.CrossFit.com. The top 30 women and 30 men will compete in the two-day online competition beginning Sept. 18. More details coming soon. Image captured by @hakire. #CrossFitGames #CrossFit #Fitness #Training #Sports #FittestonEarth

Athletes are required to have the following equipment for Stage 1 of the 2020 CrossFit Games: