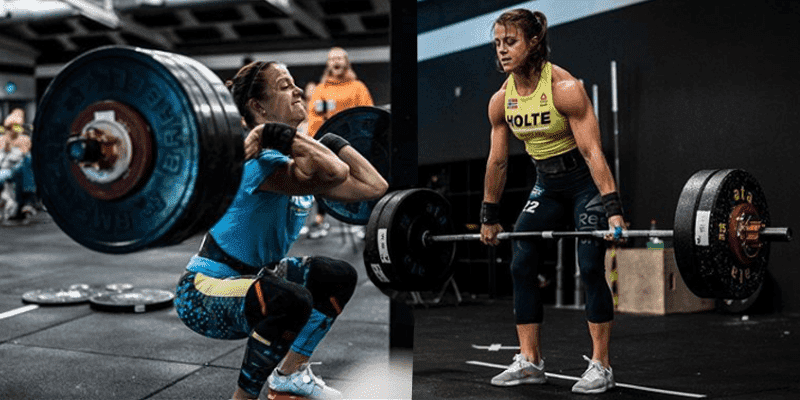 Kristin Holte, silver medallist at the 2019 CrossFit Games, finished Stage 1 of this year’s CrossFit Games in 6th place. She performed strongly, but was ultimately edged out by Kari Pearce, who jumped ahead of her with a two-point lead.

“If I’m happy with my performance once I’m done, I’ll get the placement that I deserve,” the Norwegian native said. “I know there’s things that I could have done better, but I believe that I performed to the best of my abilities.”

A difference of one place in any workout prevented Kristin from qualifying to the CrossFit Games finals in Aromas, California, where the top five women from the first stage will compete to determine the Fittest on Earth.

Holte, a 34-year-old athlete who’s competed in the CrossFit Games every year since 2014, finished the 2020 CrossFit Open in 3rd place, qualifying so for the Games. She underwent wrist surgery at the end of January, so a season of cancelled and postponed Sanctional competitions allowed her more time to heal and recover.

As an athlete, Kristin is renowned for her incredible endurance and powerful gymnastic skills, but has worked relentlessly on her weightlifting and strength – every year she keeps getting stronger and fitter.

BOXROX had the chance to catch up with her and discuss her experience, training in the lead up to the Games, and her outlook on her performance and future in the sport.

This interview has been edited and condensed for clarity.

Hey Kristin, how are you? What is it like, having finished the Games?

It’s good. I mean, it’s boring to be done with the season and not really know what’s going to happen next, but it’s good to have a little downtime and just give my body and mind some time to recover.

Do you feel like you’ve been to the Games, with all the past years having travelled all the way to the US? What was it like, competing in CrossFit Oslo?

It was different in a lot of ways; only two days of competition and not having to travel anywhere. But it was that was kind of nice too, not having the stress with travelling and adjusting to the time zone, eating food that I don’t eat normally. I could do what I usually do every single day in training, so everything was familiar.

But competing by myself in the gym, it was different and more challenging in a lot of ways because you don’t have the competitors next to you, which drive the excitement. So that was harder in a way. Still, it was a really good experience; I had all my friends and family there cheering for me. And I just knew that everyone, everybody that was in the room, they were cheering for me and that was a good feeling.

Do you prefer performing against all the other athletes, where you can see what the other people are doing in the other lanes? Or do you prefer the Open’s style, where it’s just you in your box?

There are many things that are out of your control, so you just have to figure out how to work around them and how to deal with them in the moment. And I like those things, I like things being a little unknown. I like the challenges.

How do you prepare for those kinds of eventualities that don’t know will happen or those parts of the competition that you can’t control? What kind of things do you work on?

First of all we focus on the things that we can control, and that’s my own effort, my own performance and what I’m going to do. I leave everything else out of my mind; the other competitors, what they can do, what judge I’m going to get, what the workouts are, stuff like that.

When it’s time to focus on that, I will. But if there’s something that I can’t do anything about, I will not put any energy thinking about it.

My mental coach has given me a lot of tools so that I can handle every challenging experience in my own way. There’s a lot of ways to do that, but we mainly work on breathing, visualisation, goal setting, etc.

Mentally, what was it like, performing workouts by yourself, not being able to see the leaderboard straight away and sometimes even having started a new competition block before the results from the previous block were out? Did the outlook on your performance change at all once you compared it to other athletes?

I really enjoyed that because that’s how me and my coaches have been working for several years; the main focus is my own effort and if I’m happy with my performance once I’m done, I’ll get the placement that I deserve.

It was good to just focus on performing my absolute best in every single workout. And after each workout I was like, OK, was this my hundred percent? If I said, ‘yes, it was’ then I’ll be happy no matter where I place. And I said that after almost every single workout, and so I believe that I got the placement that I deserve.

It was such a close competition.

That’s sport and that’s how it is. I was a little bummed, when I was in fifth place I really hoped I would make it.

But when I realized that I was close yet still not in I was OK with it, I had told myself I had done everything I could and performed as good as I could. I know there’s things I could have done better, but I believe I performed to the best of my abilities with the time we had to prepare for each of the events.

What was training like for you in the run up to the Games?

Then we learnt the Games would happen online and at that moment I was like ‘OK, now it’s time to push hard.’ I think I came in better prepared than I’ve ever been before. I am fitter and stronger than I was last year, so it’s been a good year despite everything that’s happened.

What do you do in order to achieve your consistency? How do you keep getting better in all these different areas?

I sometimes I ask myself that, too. I’m not getting any younger that’s for sure. But I think I’m getting smarter every single year.

I understand what I need to work on and also understand what I don’t have to do all the time, but still focus on getting even better at the things that I’m good at. Because that’s where you gain the most, there’s a huge point difference between being top three in a workout compared to being top 10.

Staying healthy has been the most important thing to me these last four years. I’ve been able to train for a full year and I hadn’t been able to do that before, where I had a lot of smaller injuries that put me out for a few weeks or a few months. I had to start over so many times that I never had a great year of training until 2017.

You said ‘The Kriger will be back’ – what are your plans training and competing in the future?

I’m going to do one more year and then we’ll see after that. But I’m still getting better. And that’s been my reason to quit, when I feel like I’m training my ass off and I’m not getting any better, that I’ve reached my potential.

I just love what I do. I love to have this opportunity and to be able to train every single day and have this as a job. I feel really honoured to be able to do that and I just don’t want to let go yet.

I’m never going to be satisfied. I feel like I always can do a little bit better and a little bit more. So that’s going to be a tough one to figure out when I reach my potential and feel that I can actually be done.

What do you think you would be doing if you just never found CrossFit?

That’s a tough one. I am so happy that I don’t have to figure that out because I would have missed out on so much and I’m so happy that I found CrossFit, but I think I’d probably have a family by now and have an eight-to-four-type job somewhere that I probably didn’t enjoy a hundred percent. But I don’t know.

And I’m just really happy that I found CrossFit and that it has been my path for so long.

One book that you love to read or that you would recommend to other people to read?

One song that you love to train to when you’re in the box?

Warrior by Mark With A K.

One place in the in the world that you would love to visit, but you’ve never been to?

One aspect of CrossFit or training that you feel like every-day CrossFitters should work on more?

Everyone could do more burpees

If you could pick any one type of food and it would always be healthy, like a bit like a guilty pleasure, what would it be?

Bread and pastries – all carbs.