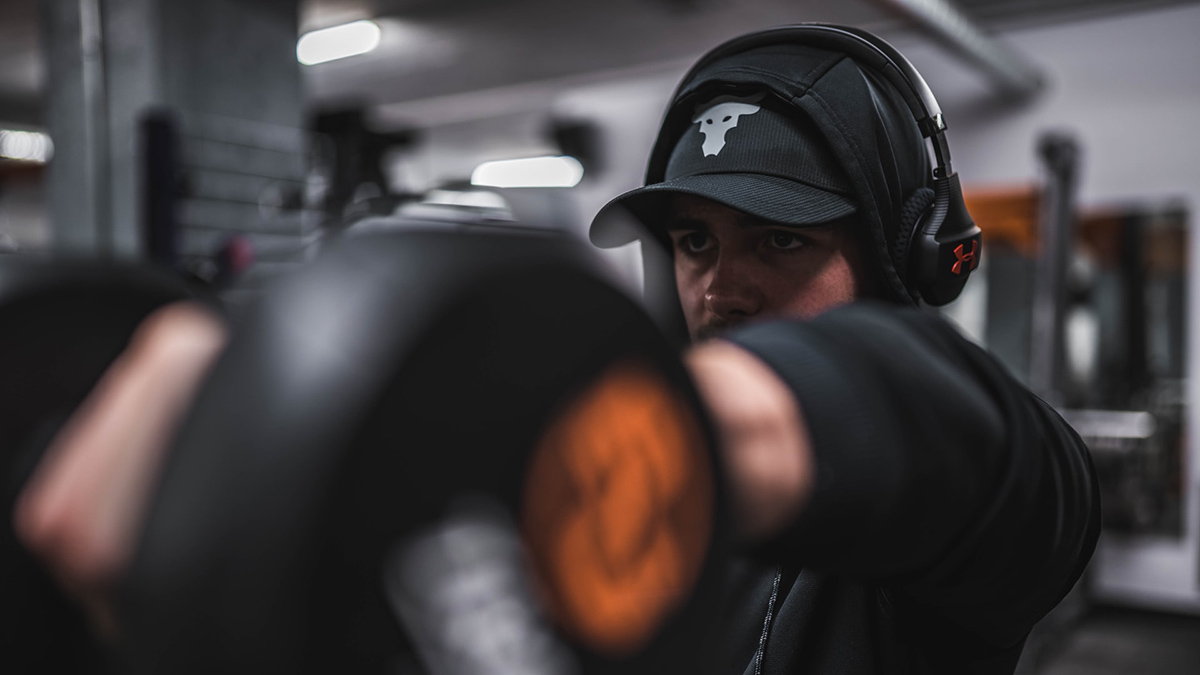 The Dumbbell Front Raise is a versatile and effective strength and muscle building exercise for all athletes.

Benefits of the Dumbbell Front Raise

The Dumbbell Front Raise strengthens primarily the shoulder (deltoids) but also works the upper chest muscles (pectorals). It is an isolation exercise for shoulder flexion.

This exercise will help you build strength and definition in the front and sides of your shoulder.

Front Dumbbell Raises primarily target the front of the shoulders, known as the anterior deltoid. This muscle is used in shoulder flexion.

Front dumbbell raises also work the lateral (side) deltoid and the serratus anterior, along with the upper and lower trapezius, clavicular part of the pectoralis major, and biceps.

How to do the Dumbbell Front Raise

This is an exercise where it is easy to pick a weight that is too heavy. Rather err on the lighter side, and strive for a strict form where you focus on getting good contact with your delts.

You can do these variations in place of or in addition to standard dumbbell raises.

As the name suggests, perform seated instead of standing.

Don’t allow your arms to move forward during this variation, which targets the sides of your shoulders. You can use a resistance band in place of dumbbells.

Change the angle of the incline bench to slightly vary the targeted muscles. You can use a barbell in place of dumbbells.

This variation switches up the rhythm of the loading.

Make sure you don’t make any of these common mistakes.

When performing this lift, do not rock or sway—always keep a strong and stationary torso.

If you sway or find that you are rocking back on your heels in order to complete the lift, for example, then the weights are probably too heavy. Try performing this exercise alternating lifting with each arm if you find yourself rocking. Once you are stable doing it that way, you might try again doing both arms together.

Don’t use momentum to lift the weights as this reduces the effectiveness of the exercise. Hoisting the weights quickly allows momentum to reduce the tension within the muscles, especially at the top of the lift.

Are Dumbbell Front Raises Good for You?

The Dumbbell Front Raise is a great exercise to build shoulder stability and strength, if performed correctly.

The Front Raise is typically performed with two light- to medium-weight dumbbells. Still, if you execute the movements wrong, you could risk taking up a spot on the injured list.

Is Dumbbell Front Raise a Push or Pull Exercise?

The main muscles targeted with front raises are the anterior and medial delts, which sit on the front and sides of the shoulder.

Lateral raises mainly target your middle delt, while lateral raises are generally easier to perform than forward raises, keeping good form is essential to reaping the most benefit.

Lateral raises should be an important part of your shoulder routine.

The anterior deltoid (L. anterior, before, in front of ; deltoides, triangular) refers to the front head of the deltoid muscle.

This part of the delt is responsible for shoulder flexion.

Classified as part of the scapulohumeral (intrinsic shoulder) muscle group, the anterior deltoid is situated medial to the lateral deltoid and lateral to the clavicular head of the pectoralis major.

It’s in the outermost layer of muscle, lying superficial to the proximal end of the biceps brachii short head, pectoralis minor and coracobrachialis.

The lower trapezius is one muscle that plays an important role in scapula movement and positioning, and also dynamic scapula stability.

The functional scapula motions of upward rotation, posterior tilt, and external rotation increase the width of the subacromial space during humeral elevation.

The pectoralis major (from Latin pectus ‘breast’) is a thick, fan-shaped muscle, situated at the chest of the human body.

If you want more exercise tips check out these articles on the Seated Dumbbell Press and Dumbbell Flys.