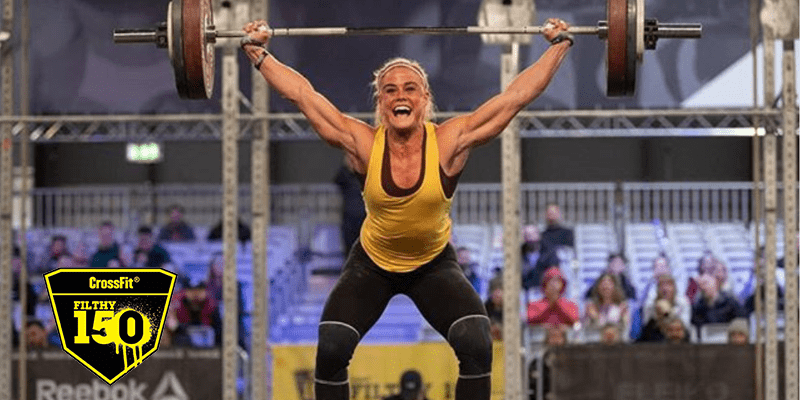 The first of 28 scheduled Sanctionals for this season kicked off on Friday November 22 in Ireland at the Filthy 150.

The three days of competition saw fresh and known names battle out for the top sport and included new events such as the Unbroken Rope Climbs and the 20m Sandbag Cleans.

Here’s a recap of everything that went down at the Filthy 150.

Team ROMWOD MeatSquat, formed by Brooke Haas, Christian Harris, Kelly Baker, and Dex Hopkins went into the final day ranked 3rd overall but took the victory at the end of the competition. They have so earnt the first official invitation to the 2020 CrossFit Games.

Both teams who stood on top of the leaderboard going into the final day, The Progrm and the Athlete Program, had some of their worse finishes (9th and 6th, and 7th and 6th respectively) on the last day, giving room for ROMWOD MeatSquat to take the lead with two 3rd place finishes in the last two events.

On the Elite Women’s side, Sara Sigmundsdottir and Kristin Holte battled all weekend long for the top spot. And while the two spots were harder to get, the race from third down was fierce. Sam Briggs, Emma McQuaid, Steph Chung, Emelie Lundberg and Andrea Solberg were all contending for the Games invitation.

It’d be Emma McQuaid who placed third in the end and, with the top three having already (unofficially) qualified to the 2020 CrossFit Games through the Open as National Champions, it was Andrea Solberg who received the invitation.

Samantha Briggs takes the Event Win and now looks like she could be in contention for that all important Games invite. She moves into 5th spot overall…but 42 points still separate @bicepslikebriggs and @andreasolberg , who currently holds the Games invite spot. One more event remains for the Elite Individuals…Squared and Rooted is going to be an exciting one to watch!!! @tfench @reebokuk @eleiko_uk @noccoireland @geometriktarget #filthy150 #filthyready #sanctionals #sanctionalsstarthere #roadtothegames #intokildare

The Norwegian athlete has been to Regionals twice before, but it’d be her first appearance at the CrossFit Games. She finished the Open ranked 9th worldwide and 3rd in Norway below Holte and Matilde Garnes.

Big names all took part in the Elite Male division at Filthy 150, but it was Justin Mederios who took the competition win. The American finished every single workout within the top six with the exception of the Trek Run.

Mederios was followed by Roman Khrennikov. The Russian athlete won five out of the nine individual events, but two inconsistent finishes kept him from the top.

Top 10 CrossFit Games finishers Will Moorad, Matt McLeod and Adrian Mundwiler were all looking to earn an invite back to the CrossFit Games at this Sanctional, as was Sean Sweeney. They finished the competition ranked 6th, 12th, WD and 7th respectively.

Nine events awaited the elite individuals and one of them, Galen, saw the introduction of a new standard for rope climbs.

Athletes could climb the rope however they wanted, the descent then had to be legless. Both hands had to go below a marker at 160 cm, with no other part of the body contacting the floor. Then athletes needed to climb up again without having touched the floor at any point.

On the women’s side, only Nicole Burke and Kristin Holte were able to complete the workout within the time cap of 8 minutes.

Jonne Koski had to withdraw from the competition after “bad food poisoning.” The athlete finished the Open ranked 12th worldwide and also took the Fittest in Finland title. Therefore, once scores are confirmed he should already have his ticket to the 2020 Games.

Koski will compete at the Dubai CrossFit Championship in December.

Unfortunately I had to withdraw from @filthy150 today due to a pretty bad food poisoning I got yesterday. I was excited to get the sanctional season started here in Ireland but have to put health in first and shift focus to @dxbfitnesschamp in December. Good luck to all the fellow competitors. The events looks fun 💪🏻

You can watch the full live stream here: