Crunches vs Planks – Which Is Better For Your Abs?

A full analysis of two of the most common ab exercises. 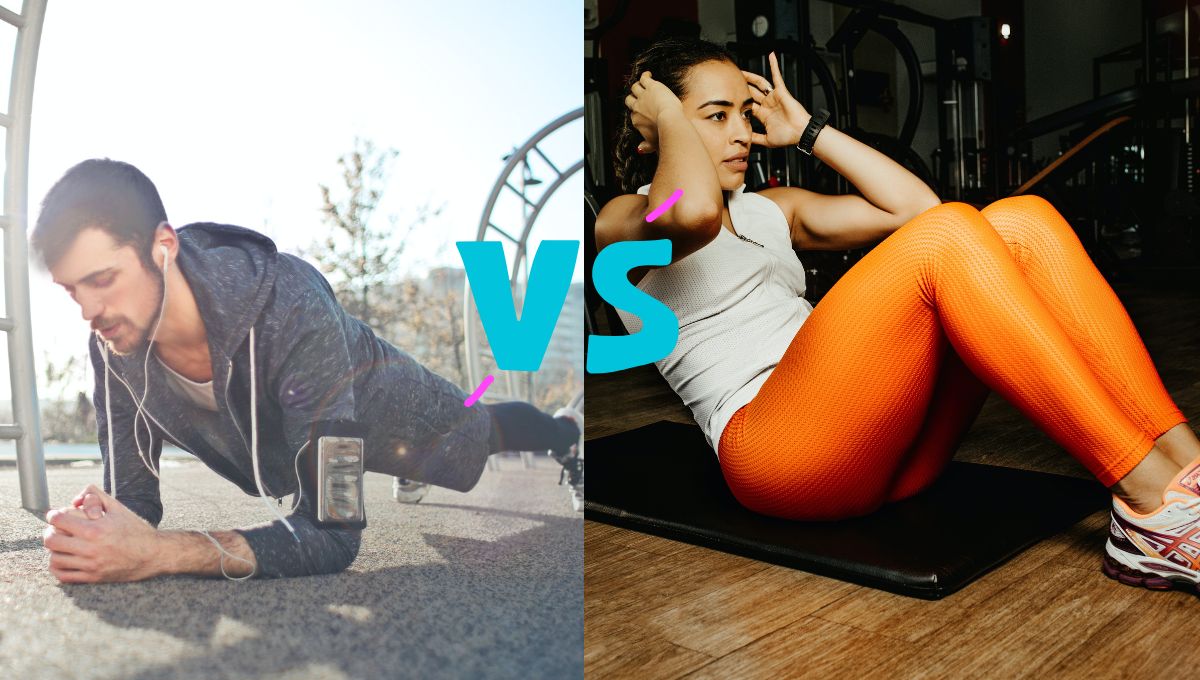 When it comes to crunches vs planks, which one is better for your abs? Check out a great in-depth analysis of these two common ab exercises.

What are the similarities and differences between each exercise? Which one works better the rectus abdominis, known as the six-pack muscle? And which one works other muscles more? So many questions that you might have that will be answered below.

The analysis of crunches vs planks you are about to see was shared by E3 Rehab, a YouTube channel focused on rehabilitation, pain, performance and injury risk reduction. In the video, physical therapist Dr Samuel Spinelli talks through the differences, similarities, and which exercise is better depending on what your goal is.

From a physical point of view, planks are an isometric hold exercise in which you maintain the position while working your core to keep your spine neutral.

Crunches make you move your spine and lift your shoulders off the floor utilising only the contraction of your abs to move your torso. This shortening and contracting of the muscles make the crunches an isotonic exercise.

Traditionally, an isometric exercise is not superior to an isotonic exercise and vice-versa.

Other muscles also targeted by both exercises are the rectus femoris, iliopsoas and erector spinae.

Which Works the Rectus Abdominis More?

The rectus abdominis has the primary function of flexing the trunk, or bringing the rib cage towards the pelvis – like in crunches. It also has the function of resisting the spine from extending in the opposite direction – like in planks.

In most research comparing both exercises, the rectus abdominis is challenged more during the crunch than the plank. This is when the standard variation of each exercise was compared.

Which works other muscles more?

If you begin looking at other muscles in your core, such as the obliques, then the planks win the battle over crunches.

In fact, if you are doing planks, your obliques will get as much work as your rectus abdominis. The rectus femoris also gets more work during the plank compared to crunches.

For performance, two studies were taken into consideration. But again, it is difficult to assign one exercise that is better than the other. Both improved overall in sit tests, plank tests, and more dynamic activities such as 20-metre sprints.

And that is all you need to know about crunches vs planks. If you want to hear more about it, check out the video below.

Proven Ways to Get a Six-Pack