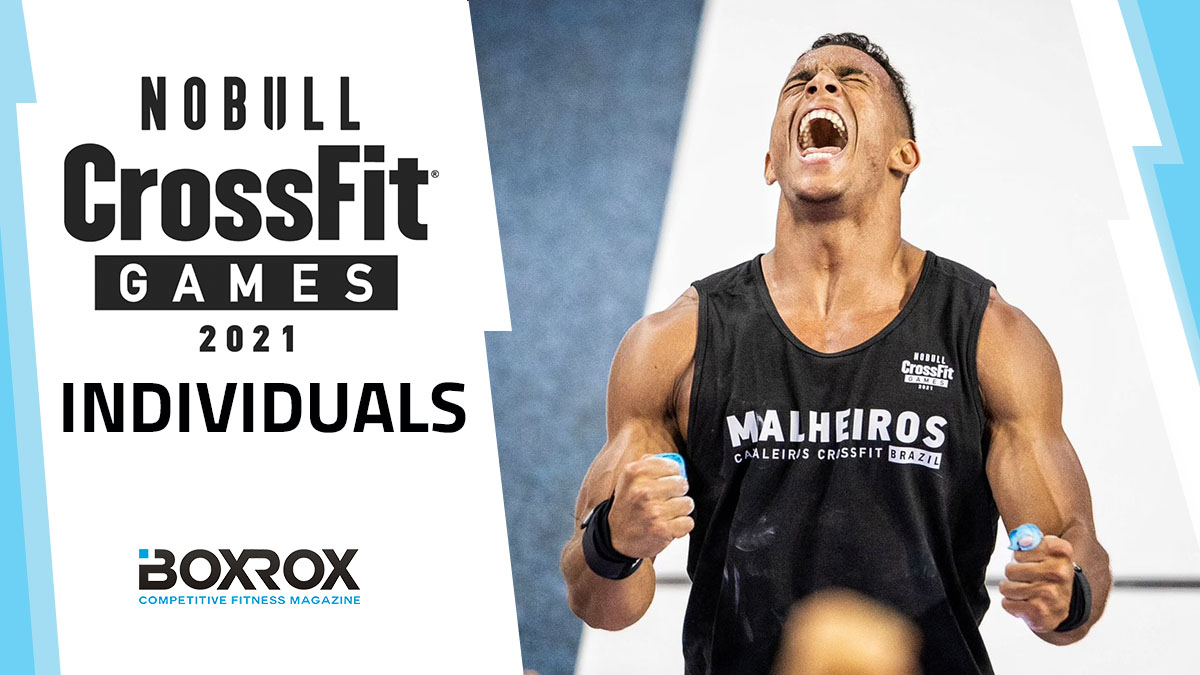 It’s Day 4 of the 2021 CrossFit Games and Day 2 of the Individual and Teams Events. Following an exciting Day 1, which saw Tia Clair Toomey dominate and Patrick Vellner begin to claw his way back up the leaderboard after a disappointing finish in Event 1. Here’s your Individual Day 4 Recap.

Elsewhere on the leaderboard, Brent Fikowski finished as Leader on Day 1 after 4 events, closely followed by Justin Medeiros ad Jonne Kowski. Haley Adams and Kristin Holte currently sit in the two spots behind Tia, but after a decisive and exciting IE4 win from Mal O’Brien there is still plenty to watch out for in the Women’s Division, too.

Only 30 athletes advance to Saturday at the end of Individual Event 9.

Watch all the action! BEST LIVESTREAM, Times, Dates and Full Details from your Time Zone

38 athletes enter, 30 advance at the start of Day 4. In Heat 1 the field was neck-and-neck for the first two rounds, with Travis Mayer edging out the field at the start. Royce Dunne however pulled ahead to take the Heat win, with Carl Sager in second and Travis Mayer in third. In Heat 2 Pat Vellner beat Dunne’s time for his won his second Event of the competition, followed by Leader Brent Fikowski and Royce Dunne in third.

In the first of 4 Heats for the men, not a single athlete finished in the 6-minute time cap. Alexandre Caron came the closest to finishing with one barbell clean remaining. Jeffrey Adler led the pack in Heat 2, finishing in the time cap with 5:45 just ahead of Bayden Brown. In Heat 3 Travis Mayer and Alex Vigneault slip in just under the time cap, but neither beat Adler’s score.

In the final Heat, Saxon Panchik wins the heat with Justin Medeiros also sliding under the time cap with less than a second left to spare. Adler wins the event overall.

Jessica Griffith takes Heat 1 for the women in 6:25, setting a strong opening time for the rest of the field. Ellie Turner slips under Griffith’s time in Heat 2 with a 6:21 finish after Arielle Loewen failed to clear her first attempt at her last barbell. Gabriela Migala breezed through the final lift to take Heat 3, beating Ellie Turner’s time and setting the bar high for Heat 4.

Heat 4 was a different beast, with a race to the finish for Tia-Clair Toomey and Kristi Eramo-O’Connell, with Toomey taking the Event win in 5:43.

Event 7 had a shorter run, with heavier bars, directly following Event 6. Adrian Mundwiler withdrew from the competition. Back with the Men’s Heat 1, Zach Watts wins with an early time of 5:47. He was not the first athlete to go sub 6-minutes in this event, with Event 6 winner Jeffrey Adler destroying Watts’ time in 4:59.

However in Heat 3 Brazilian Guilherme Malheiros took the lead with 4:51. In the final heat, Saxon Panchik takes it but cannot touch Malheiros’ time, giving Malheiros his second Event win of the Games.

Heading into the Women’s Division, Heat 1 is won by Alessandra Pichelli, but the best moment was the successful final lift by South Korea’s Seungyeon Choi which brought the Colosseum to their feet. Heat 2 Laura Clifton takes it, but doesn’t beat Pichelli’s time of 5:50. But in Heat 3 Gabriela Migala smokes that lead with a 5:13 finish.

Tia-Clair Toomey, however, is completely unbeatable with 4:44, going two-for-two in the Colosseum and tying Mat Fraser with the most event wins ever at the CrossFit Games. Laura Horvath is the only other athlete to complete in a sub-5 minute time.

The final event of Day 4 was a handstand walk across a specially prepared obstacle course. This was the final event before the bottom 9 athletes are cut, leaving 30 to advance through to tomorrow’s competition.

Agustin Richelme takes Heat 1 in 5:00. That time is absolutely demolished by Samuel Cournoyer in 2:19 in Heat 2. Scott Panchik takes the time-to-beat with 2:05 in Heat 3, and in Heat 4 Justin Medeiros took the heat but couldn’t hit Panchik, who wins the event.

Sasha Nievas took the first Heat in 3:31 for the Women, followed in Heat 2 by Baylee Rayl who beat her time with 3:13. Danielle Brandon put her insane handstand ability on display who took the the best time of the day so far with a sub 2-minute time of 1:43 in Heat 3. After a tough Event 7, Haley Adams won Heat 4 and came in second behind Brandon.

Following this event, the bottom athletes will be cut. 30 will be moving on to Event 10. Chandler Smith dominated Heat 1 from the start, powering through the event completely unbroken in 3:49. Brent Fikowski chases Medeiros at the top of the leaderboard with an Event win (3:31), adding 100 points to his current score. Justin Medeiros finishes the day on top of the leaderboard.

The race for 30th place was on in Heat 1 between Sam Briggs and Regan Huckerby, who were both sitting on 266 points after 8 events. Ellie Turner takes the heat in 4:25. Briggs finished the Heat in third, possibly saving herself from being cut. Heat 2 was a race between Amanda Barnhart and Annie Thorisdottir, with Amanda Barnhart clinching the event in 4:01.

Tia-Clair Toomey ends the day on top of the leaderboard, well on her way to her fifth CrossFit Games title heading into Day 5.