“No Podium, No Prize” – Why Athlete Was Left Without Prize for Missing Awards Ceremony 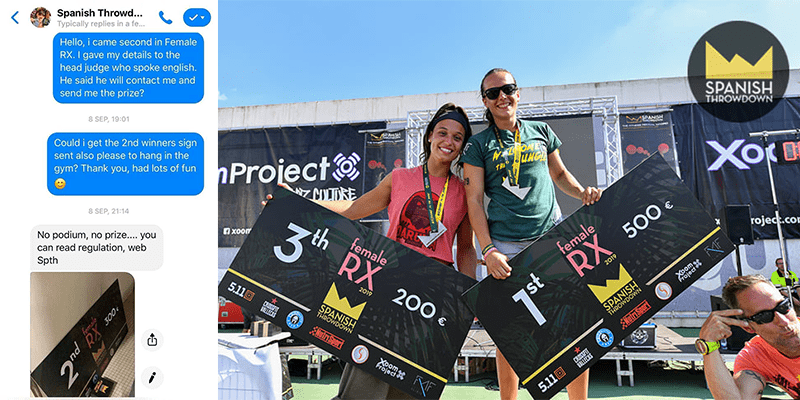 Athlete Cliona Ní Cheallacháin NicChárthaigh battled out for first place at the Spanish Throwdown, a CrossFit competition held in Madrid on September 6-8.

After eight workouts, three days of competition and three event wins, Cliona finished second in the Female RX division. The Irish athlete was, however, unable to attend the awards ceremony because she had to catch her flight back to Ireland.

Updating the leaderboard in the Uber on her way to the airport – she had done the final workout and caught the ride five minutes later – she found out she’d placed second and messaged the Spanish Throwdown on Facebook to thank them for the weekend and ask about arrangements to receive her prize.

Landing in Dublin, a picture of her prize together with message from the competition waited on her inbox: “No podium, no prize…. you can read regulation, web Spth”. 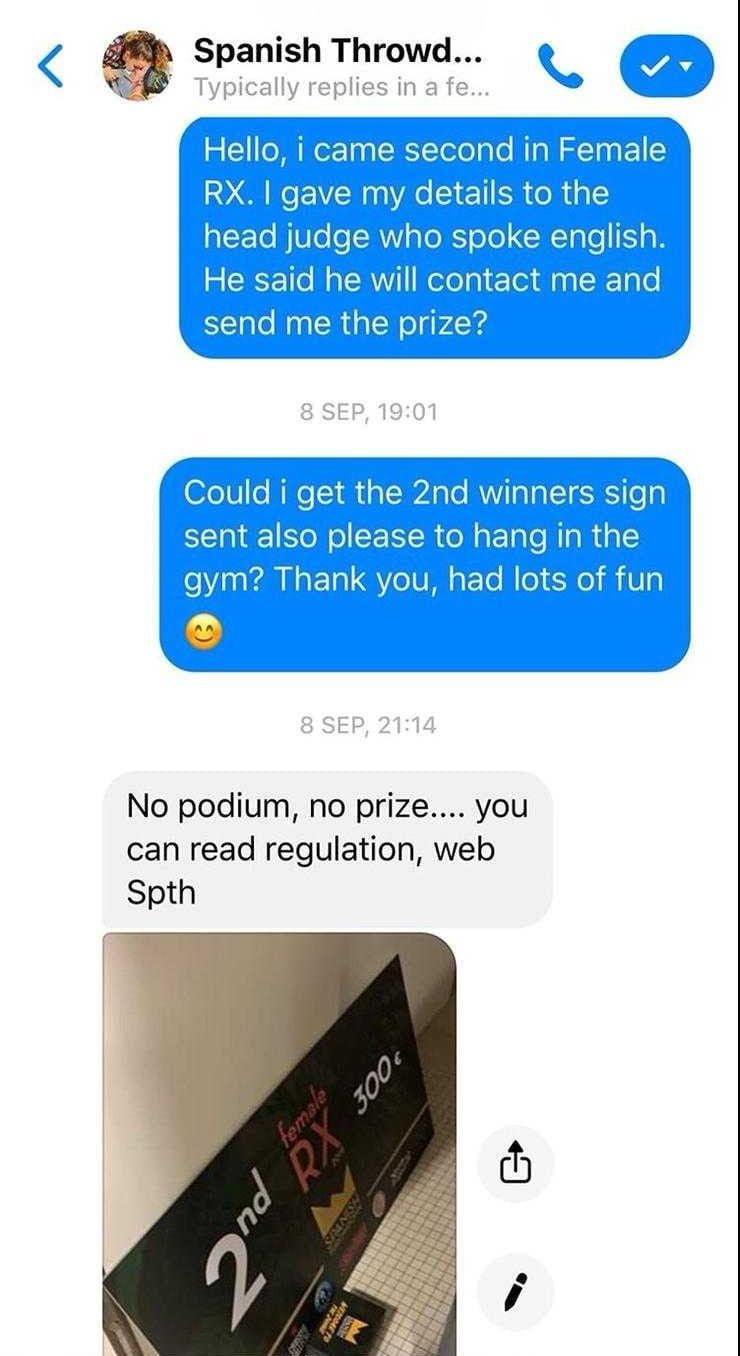 Clause 7 of the Competition Rulebook of the Spanish Throwdown (SPTH) states that: “In case of personal absence, from the finalists to the final ceremony and rise to the podium, said athlete will lose the right to the delivery of the prizes in cash and as to the pack of the established brands. Having only the right to the trophy.”

Every athlete agrees to abide by the rulebook when they sign up to the competition.

Cliona was aware she’d have to leave straight after the final workout as the competition was running over an hour late and she had a flight to catch. Knowing she’d miss the awards ceremony, she spoke to the competition’s staff member who had been briefing them all weekend to make him aware of it and check there was no problem.

“I understand the regulations but the head judge told me ‘okay prefect’ as I was going on the final floor,” Cliona told BOXROX over a phone call. “He understood that I was leaving straight after the final and was going into the final in second place.”

Cliona had taken two days off work for the competition and had to take that flight from Madrid because she had work on Monday and needed to be home for it. “I looked at the schedule and knew that we’d have time,” she said. “I didn’t stand on the podium because instead I was at the airport running for my flight and I was gutted about that,” she continuted.

“They really made it miserable for me. I should have been delighted that I finished on the podium,” Cliona said. “I really did enjoy the competition. But at the end of this they should have dealt with it so much better.”

After a week reaching dead ends, she took onto Instagram to share her story. “I sent them an email linking to the Instagram post saying look, just give me what I deserve, give me what I worked for. Without athletes there’s no competition,” she said.

“We organise this competition and set the rules we think align with the spirit of sport. Just like in the Olympics and any other competitions, if you don’t step on the podium you have no right to the prize,” a spokesperson for the Spanish Throwdown who wished for his name not to be published (the person has received a lot of abuse online) told BOXROX over a phone call. “Why have this rule? Because it’s disrespectful to the sponsors, the organisation and the fellow athletes if someone doesn’t step on the podium.”

“You spend a year organising an event, looking for sponsors and volunteers who’ll be there for free and then the moment of the awards ceremony comes and athletes don’t show up because they’ll lose their flights…

“Yes, it’s true the event was delayed by an hour, but the timings are approximate,” he continued.

The awards ceremony is a time where many pictures are taken and, besides being a part of the competition and the rulebook, it affects the event image to have empty podiums. 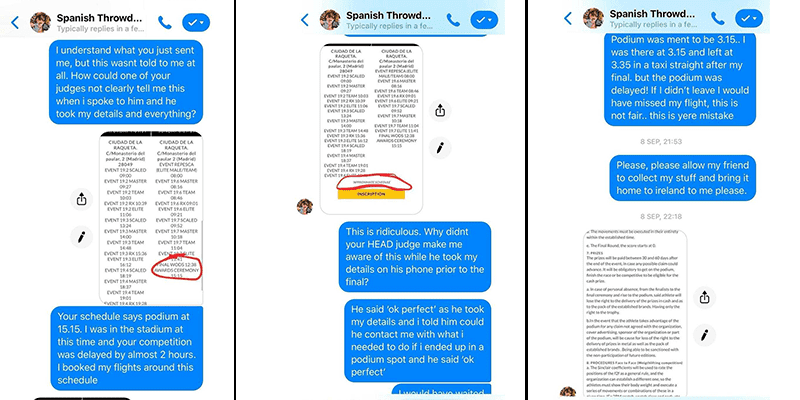 “If you think we don’t respect an athlete for forcing athletes to step on the podium and comply with the rest of the rules that’s your point of view, that’s an opinion. We respect sportsmanship,” the event director stated.

“As a sportsperson one should respect the rules whether you like them or not, there’s no need to send abuse and threats on social media,” the spokesperson said. “We have received many threats and insults online; this isn’t sport, we stand by our rules and defend them,” the spokesperson continued. “We’ve always been firm with our decisions, we don’t award wildcards because we value those who qualify online. Standing by the rulebook is what we believe in.”

“But receiving threats, insults and what not… you’re less willing to start a conversation.”

From the live feed, we can confirm the prize ceremony wasn’t delayed by more than 40 minutes from its original schedule.

Since speaking to both parties Cliona has been sanctioned from the competition for not stepping on the podium. “We don’t stand for promoting a culture that encourages this type of behaviour,” the spokesperson said in follow up communication. “This goes against the values of sport, where people should respect the rulebook, athletes, volunteers, the organisation and sport in general.

“We are sure Cliona is a great athlete and we wish her all the best, but that has nothing to do with our decision to abide by our rules.”

The Spanish Throwdown is expected to release a statement in the coming days.

The interview with the Spanish Throwdown spokesperson was originally conducted in Spanish and translated by Caro Kyllmann.