The 20 Single Most Important Kettlebell Exercises

One kettlebell and 20 movements for you to master and get fitter. 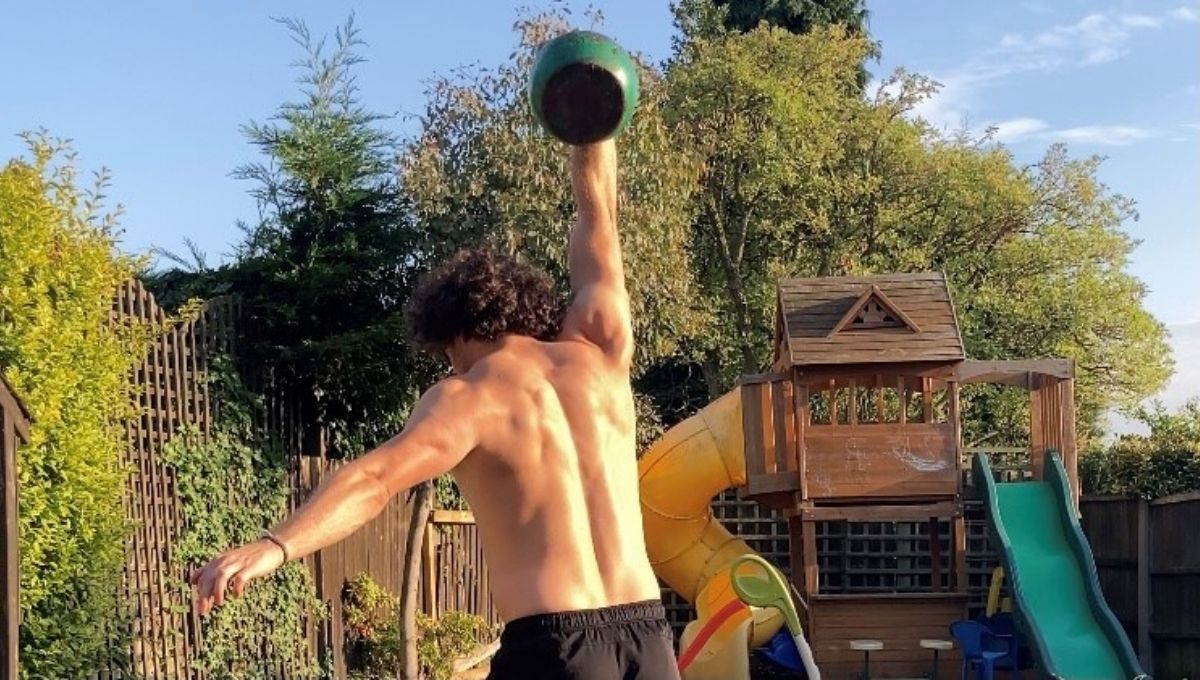 You only have one kettlebell and want to get fit? Then take a look at the 20 most important single kettlebell exercises you need to master.

Kettlebell enthusiasts will argue that movements such as the Turkish get-up should be included within this list. However, I want to stress that when compiling this article I was looking to select 20 of the most easily performed movements that bring the best response from the body.

Turkish getups along with many other complex kettlebell movements are incredibly helpful, but the high level of technique required means they will not be making this list.

“The Kettlebell Swing is the Swiss Army Knife of exercises, It is a total body strength and conditioning workout in one single movement.”

When it comes to single Kettlebell exercises, there is nothing more important than the Kettlebell Swing. It is the king of Kettlebell movements.

Whether you’re looking to build strength, muscular endurance, burn some fat, improve athletic performance, or become a more functional person, the Kettlebell swing will give you an unrivalled bang for your buck!

“The Squat in one form or another should be the foundation of any good program.”

If the Swing is the King of the kettlebell jungle, the squat is the emperor of the rest of the fitness world.

It is the most functional movement known to man, from getting out of bed in the morning to bending down to pick something up. We squat multiple times per day without realising it so getting stronger in this department is vital.

“Pushing, Pressing, Punching… The Single Arm Press is as functional as it gets, whether your training to be a fighter a survivor or a taxi driver.”

The Single Arm Kettlebell Press builds upper body strength. It allows you to train your shoulder muscles in a full range of motion as well as working the core muscles as you stabilise during the press.

“If you want to push more you gotta pull more…it’s a fact of life.”

If you’re going to Press you better balance it with some Pull. We’ve all been guilty at some point or another of prioritising the mirror muscles over the muscles we don’t see so much.

It’s those muscles that are less visible in the mirror that make the difference to your strength and performance.

“Picking a load from the floor and racking it on your chest is one of the most primal movements known to man, think picking up your kids.”

First of all, when I speak about the Kettlebell clean and the snatch I’m talking about a traditional clean and snatch, not from a swing, but from the ground up.

“Grip it and Rip it, Nothing beats the snatch for expressing your inner savage.”

There is nothing that satisfies the primal urges like a snatch. Gripping and ripping a weight from the floor and throwing it overhead brings out the inner caveman in all of us.

Aside from that, there are many benefits to performing the snatch. The cross over to sports and athletic performance make this a must for any athlete looking to get more out of an exercise.

“The Swing is King, the Squat ain’t far behind but how about a combination of the 2? This is a serious bang for your buck movement.”

It is like your hamstrings and your quads are playing tennis, battling muscle activation back and forth between one another.

The Tater is the perfect wall ball alternative when you are limited by equipment and space as well as being a great movement to help develop lower body power for clean and jump variations.

“The biggest bang for your buck possible.”

It’s hard to find a movement that brings a greater response from the body than the thruster.

Squatting your Kettlebell before explosively pressing overhead is the ultimate display of primal power.

Whether performed single-handed or with a two-handed grip, these are a real bang for your buck movement.

“All the links in the posterior chain pulling together to produce one powerful movement.”

The Deadlift High Pull is a posterior powerhouse. A movement that crosses every joint in the body to perform a huge multi-compound movement that uses the hamstrings, glutes, and spinal erectors.

“I like to think of this as the worker’s row, dynamically pulling the bell as you switch hands has a huge carryover to all rope/chain pulling and climbing.”

Ballistic rows come with a plethora of benefits. The row itself is a huge compound movement but when we add in the ballistic element of bracing the core and maintaining position, as we change hands, there is a deceleration of the bell. This can help build joints, tendons, and ligaments.

“Don’t use machines, build them. There isn’t a machine in the gym capable of the upper body bang for your buck that comes with the Kettlebell Headcutter.”

Lifting the Kettlebell from hips to overhead, using the shallow hip hinge from the swing, the pull from the biceps and traps before firing up the triceps and delts to press overhead.

It really is a powerhouse of a movement and one of the most complete ones out of this list of Single Kettlebell Exercises.

“A Tower of power that’s too sweet to be sour.”

Exploding into the air while holding a weight has many benefits, most importantly increasing power production and improving the ability to harness and transfer energy during ballistic movements.

This has a huge carryover to improving weight lifting movements and sports performance. The Explosive Deadlift is my favourite loaded plyometric movement.

The movement is initiated using the hamstring and the power production comes from the posterior chain which supports movements such as the snatch, clean, swing and vertical jump.

“Step Strong, Last long… The more load your legs can handle the more useful they become.”

Unilateral lower body exercises are vital to building a strong and durable base. You can sex it up however you wish but you would be hard-pressed to find a better movement than the good old fashioned Goblet Lunge.

When we talk about functional movements, the Lunge is one of the best. It strengthens the body’s ability to carry the load and it is useful for elite athletes and beginners all together.

“Everything is bigger in America and the Kettlebell Swing is no different.”

The American Swing has become a staple in the CrossFit community, becoming the go-to Swing when Kettlebell Swings are prescribed.

The reason for this is the American swing has a clear starting and ending point – the bell has to pass under the hips and then finish locked out overhead. This makes the American Swing an easier movement to judge in the competition.

The American Swing comes in for a lot of criticism with kettlebell enthusiasts, but I actually see it as a valuable movement regardless of whether your competing or not.

The Kettlebell Clean and Press comes in many forms, my favourite variation is the single kettlebell exercises variation as I believe it gives the greatest strength and conditioning bang for your buck possible.

Cleaning the bell from a dead stop and then pressing the bell overhead is one of the biggest possible movement patterns.

The movement crosses every joint using almost every muscle group in the body to perform, thus making it a non-negotiable in any good kettlebell training program.

“Lifting weights is one thing, but can you move with weight”

The Kettlebell Goblet carry is my favourite single Kettlebell loaded carry. The goblet position of the load allows us to strengthen and activate all those postural muscles through the trunk and glutes all the way to the traps, lats and rear delts.

The stronger you can become at holding, lifting and carrying weights in this goblet position the more load you will be able to handle through movements other front-loaded movements such as the Front Squat, Shoulder Press or Clean variations.

”When your body has all the answers, its time to change the questions”

Kick Back Push-ups are a great exercise for getting more out of your horizontal pushing movement pattern. They increase the core and shoulder stability required to perform the standard push-ups and challenge the chest, shoulders and triceps in ways the standard push up cannot.

As much as this is a great movement to work on your pushing muscles and specifically triceps strength it is also a huge movement for your core.

“Kettlebell Slinging at its finest, get this right and it’s a thing of beauty…Let it flow”

The Swing itself will challenge your posterior chain more than a standard swing as you shift the load to one side of the body. You also then have the extra power output needed to propel the bell upwards in that single-arm Swing and not forgetting the hand-eye coordination required to switch hands at the top.

The Kettlebell Floor Press gives you the option to get your bro pump on without needed a barbell or a bench.

The Kettlebell Floor press is a great horizontal pressing movement, the grip being narrow on the bell really helps to recruit those triceps while still working the muscles in the chest and shoulders.

“A retro mixtape of movement but when bang for your buck is the goal can you really top it?”

The Kettlebell Bluster (Better naming options are welcome) is a total body mash-up of movements.

We go from a half burpee to a clean, squat and finishing with a press overhead. It’s a movement that crosses every single joint in the body and then some.

The KB Bluster is the perfect movement for those workouts when you are short on time and need to get some serious work done.

If you want to get more out of your kettlebells, click here.

And Join the Savages!

“NASM Certified Personal Trainer Minimal Kit specialist, Daddy to Luca & Roma Ray. As a father and business owner, I’m well aware that not everybody has hours each day to spend in the gym. I believe that you can do a lot without a lot, which is why I’m a lover of the single Kettlebell workout. I like to keep things as functional as possible, which means I do not waste time with unnecessary movement’s. Everything I do with my athletes has a purpose and a carryover to sports, activities and everyday life.”