Three exciting days of competition have wrapped up – catch up on all the action. 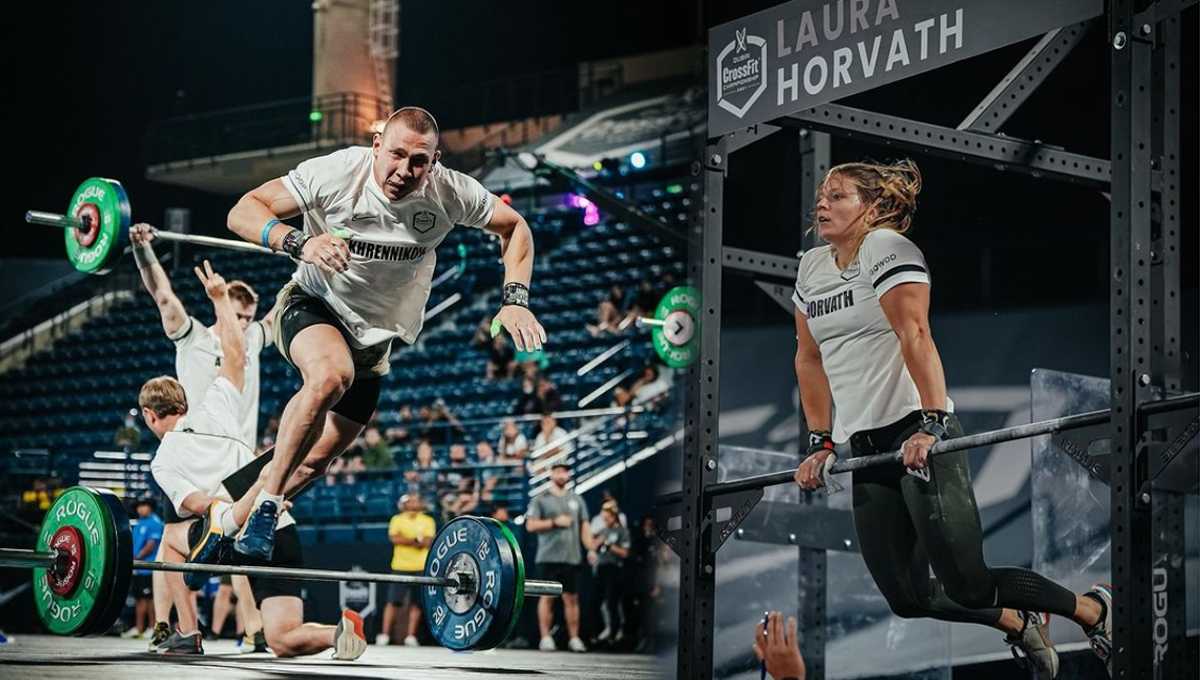 Three days of competition wrapped up with Laura Horvath and Roman Khrennikov on top of the leaderboard.

Khrennikov secured himself three event wins and finished every workout of the weekend within the top 5, while Horvath also took an event win and stayed consistently within the top 5 with the exception of Event 6 – Part B.

The Dubai CrossFit Championship is a CrossFit-licenced competition renowned for featuring some of the biggest prize purse as well as top names in the sport. Its 2021 edition was an invite-only event with 20 top men and 20 top women going head-to-head.

Read more: How Much Each Athlete Won at the 2021 Dubai CrossFit Championship

The leaderboard after three days of competition shaped up as follows:

You can find the full leaderboard here.

Notable performances and events from the Dubai CrossFit Championship

Kristin Holte announced she would retire from the CrossFit Games after coming 4th in the big event this year. Since then, she’s competed in smaller events (and won them) and made her final appearance as an individual athlete at Dubai.

She showcased, for a final time, the incredible athlete she is and finished the weekend in second place.

With her all-or-nothing attitude, the Norwegian athlete doesn’t plan to sign up for the 2022 CrossFit Open and instead plans to become a mentor for younger athletes.

Despite being the oldest athlete in the field, Sam Briggs was incredibly close to a podium position this weekend.

The 39-year-old did win the competition in 2018 and finished 3rd in 2019 but with a filed featuring athletes aged 16 (Emma Lawson) and 17 (Emma Cary), the Engine’s performance is just the more impressive.

After winning the two opening events at the Dubai CrossFit Championship, Garard stayed in contention for a podium spot throughout the competition and snatched third.

The Dubai CrossFit Championship was the first elite event the Australian athlete competed at after serving a four-year doping ban.

“This competition was a great ice breaker for me, I learnt allot & I got plenty of reminders about competing,” Garard wrote on Instagram.

Sara Sigmundsdottir and Willy Georges come back from injury

Both Sara Sigmnudsdottir and Willy Gerges pulled out of the 2021 CrossFit Open following injuries, finishing so their competitive season.

After an ACL tear and a shoulder surgery respectively, both athletes made a comeback to competition last week and finished within the top 10.

She said she was “happy too face my fear and proving that I can trust my body and that my body can trust me.”

17-year-old Emma Cary withdrew from the competition after a “back injury in event 3,” which included rowing, A-jumps with weight vest, 100 lb sandbag cleans, bar muscle-ups, and paralette handstand push-ups.

“It was the absolute hardest decision I’ve ever had to make,” she wrote. “Big things coming for me and I WILL be 100% when it matters most.”

By withdrawing she forfeited any prize money she could have won. Cary earnt the respect of the world by finishing 2nd in the 2021 worldwide CrossFit Open.