Programmed specifically for the 6 weeks leading up to the 2021 CrossFit Open, Sam Briggs presents an exclusive workout program to get you ready to perform at your absolute best, whatever Dave Castro throws at us!

Sam has programmed the workouts in both equipment and equipment free versions in compliance with the guidelines announced by CrossFit earlier this year.

At the 2010 CrossFit Games, Briggs’ highest finish was third place on “Pyramid Double Helen”, which she completed in 18:30. The only two women to beat her were the overall second and first place Games finishers, Annie Thorisdottir (17:53) and Kristan Clever (18:23). Briggs finished in 19th place overall.

By 2011, Briggs was a more developed athlete and improved to 4th overall. Briggs earned top 10 event finishes on 7 of the 10 events, including two event wins on “The End 2” and “The End 3”.

In 2012, Briggs was sidelined by a knee injury. She officially withdrew from the competition in March, midway through the CrossFit Open, the first stage of qualifying for the CrossFit Games, citing maltracking of her right kneecap which had been an ongoing issue for a couple of years. She later learned she also had a fractured patella.

During her year off, Briggs changed her approach to training. The head trainer at CrossFit 3D, a CrossFit gym that Briggs attended in the past, described her approach to training in the early years as very high volume metabolic conditioning which resulted in her “smashing herself into the ground.” With awareness of her injuries, her coach, Steadman, and sports therapist, James Jowsey, were able to program workouts that would not cause further damage. As she laid off many workouts that involved her legs, she spent her time developing her upper body gymnastics skills on the pull-up bar, rope, and gymnastics rings, and also opened her own CrossFit affiliate, Train Manchester.

In 2013, Briggs returned to competition with the drive of an athlete who had been forced onto the sidelines for a year. She won the worldwide Open, the Europe Regional, and CrossFit Games in Carson. It was a decisive victory, though some critics argue that the decisiveness was a consequence of the fact that the two-time champion, Annie Thorisdottir (2011, 2012), was not able to defend the title that year because of a back injury in the winter, and Julie Foucher, the previous year’s silver medalist, did not compete since she chose to focus on medical school. At the 2013 Games, Briggs put in performances that helped bolster her nickname of “The Engine” such as completing a half-marathon row of 21,097 meters on an indoor Concept 2 rower that Briggs finished in one hour and 27 minutes (1:27:47.9). 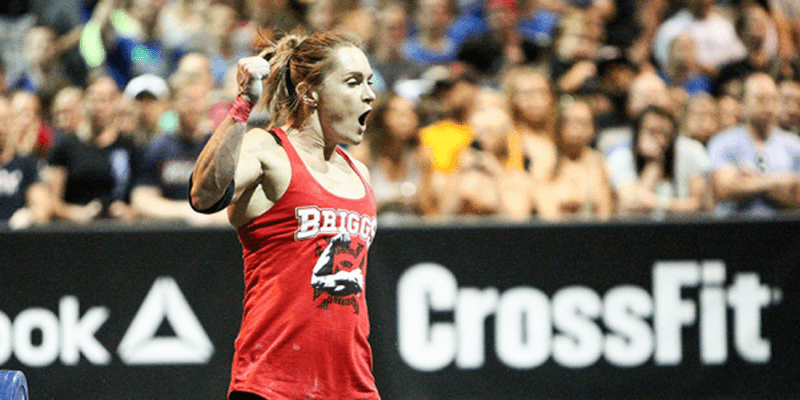 The next spring, Briggs won the Open yet again but failed to qualify for the Games after placing fourth at the 2014 Europe Regional. Briggs finished in 26th place on the maximum distance handstand walk event, going only 65 ft (20 m), early in the competition and even with three event wins and never finishing lower than eighth on any other event, Briggs was unable to close the gap between herself and the leading athletes. Briggs became the first reigning individual champion to be eliminated at the Regionals.

ESPNW named Briggs an “athlete to watch” at the 2015 Games, however, Briggs had another rough year by injuring her Sacroiliac joint midway through the CrossFit Open qualifying stage, and then breaking her foot prior to the Regionals. Briggs still managed to earn 2nd overall at the 2015 Atlantic Regional (having moved to Florida during the year) with her broken foot, thereby qualifying for the 2015 CrossFit Games.

At the 2015 Games, Briggs was able to climb to 4th overall despite the injuries that she had suffered earlier in the season. Her best performance was on Murph, in which the athletes completed in the over 100 °F (38 °C) temperatures in the afternoon. While other athletes, like Annie Thorisdottir and Kara Webb, sustained heat related injuries, Briggs ran to the finish line in 39 minutes, 10 seconds, seemingly unfazed and more than a minute ahead of the next closest female athlete, Alethea Boon of New Zealand, and quicker than all the male athletes but one, Björgvin Karl Guðmundsson of Iceland. Eight athletes would not finish within the 1 hour time-cap, including eight-times Games competitor Rebecca Voigt, twice champion Annie Thorisdottir, and 2013 silver medalist Lindsey Valenzuela.