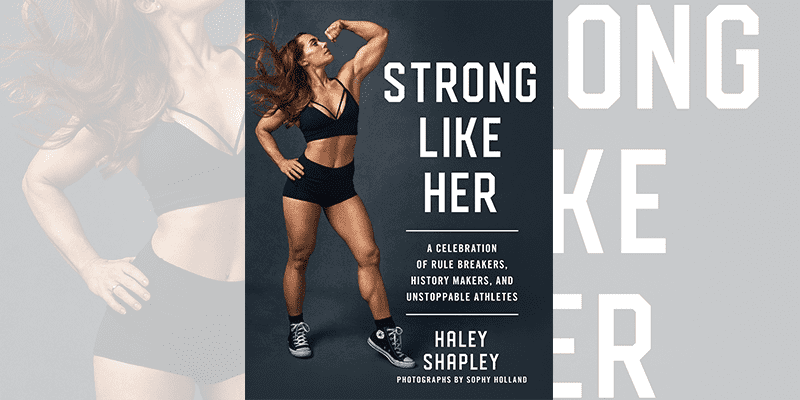 The new book, Strong Like Her, explores the beginnings of the negative perceptions towards female strength and tells the story of how these ideas have been, and still are, being challenged today. Between many other impressive athletes, it features Tia-Clair Toomey, Katrin Davidsdottir and Lindy Barber.

COMING APRIL 2020! I’m thrilled to announce that we officially have a cover for my book, Strong Like Her, which celebrates women who defied convention in pursuit of physical strength, throughout history and today. ? Photographed by @sophyholland and published by @gallerybooks, it promises to be a beautiful, inspirational look at the power of women. Preorder a copy at the link in my bio or wherever books are sold. ? #stronglikeher #stronglikeherbook

Author Haley Shapley decided to enter a bodybuilding competition for the same reason she summitted a 14,000-foot mountain, ran a marathon and completed a triathlon: it presented a challenge. And while the training came with a dozen benefits and positive experiences, she was also met with criticism along the way by friends and family who didn’t approve of the way her body changed and how she was beginning to look.

You don’t have to spend too long on social media before you find derogatory comments on muscular female athletes – and visible muscularity on women in general. In fact, a 2019 survey found that out of 900 women participating in weightlifting or CrossFit, 94% were told the sport would make them look “too bulky,” “too muscly” or “masculine.”

Comments go from the rude and disrespectful to the utterly ridiculous: “Why is that dude wearing a sports bra?” or “No wonder she’s single, men don’t like that much muscle.” To some people, the fact that a woman might choose to work out for any reason other than to be more sexually attractive to men seems unfathomable.

But female strength dates back to the beginning of time and a few role models continue to fight and turn the tide; normalising, encouraging and celebrating female strength. Journalist and author Haley Shapley is such a woman.

We’re climbing into the weekend with today’s #StrongLikeHer athlete, @nvr_gvup. Today Maggi is known for her gutsy performances on American Ninja Warrior (@ninjawarrior), but Maggi never played sports until she was 14, when a PE teacher noticed that she looked fast. She received an invite from the track coaches to try out for the team, and she quickly discovered that she had natural athletic ability. As a kid from a low-income background, sports changed the trajectory of her life. She was heavily recruited by colleges and ended up running at @unlincoln. Even after losing her scholarship, she kept training hard and had her most successful season yet. The @kttape athlete has used that attitude of perseverance in all areas of her life. “I always knew I had the fire to try things and to not sell myself short,” she says. “I had to be willing to climb mountains when I had no idea what was ahead.” ⛰️⁣ ⁣ bit.ly/stronglikeher⁣ ⁣ ?: @sophyholland⁣ ??‍♀️: @erintierneyhair⁣ ?: @pinksun⁣ ?: @GalleryBooks/@SimonandSchuster

“Suddenly, my ideas about my body and what I was capable of were quickly changing,” she told BOXROX. “I felt like I was seeing so many women in the public eye who were strong and loving it, and I wanted to know how that had evolved, whether it had been something that slowly built over time or if it had gone in and out of fashion during various eras of history.

“I searched for books on the topic, but I discovered that there wasn’t much out there that took a close look at the history of women and physical strength — that’s when I knew this was something I could write.”

Her new book, Strong Like Her, highlights the history of female strength; from women being allowed into the marathon to the female athletes fighting for equal pay today. Along the way, she highlights remarkable female athletes and looks for the answers as to why society at large has been conditioned to dislike big muscles in women.

Today’s powerhouse #StrongLikeHer athlete is @lindybarber, who played soccer at the @universityofdayton and quickly became competitive in @CrossFit. But early in her career, she injured her back—and discovered she had spina bifida, scoliosis, and a fractured L-5 vertebra. Doctors said she would never squat again. Spoiler alert: She did. In fact, she competed in the @CrossFitGames twice as an individual and three times as part of the storied Team @CrossFitMayhemFreedom. They won twice, including Lindy’s final year of competition in 2018.⁣ ⁣ bit.ly/stronglikeher⁣ ⁣ ?: @sophyholland⁣ ?: @deyckeheidorn⁣ ?: @colleenrunnemakeup⁣ ?: @GalleryBooks/@SimonandSchuster

“My goal in highlighting strong women is not to say everyone must be like them but to say everyone should feel able to be like them,” Shapley writes in her book. Thanks to countless women across the ages, women can now pursue strength goals without “concern that [their] uterus might fall out or that [they’ll] never attract a man or that [they will] just be wasting my time on a futile pursuit.”

The stories of strong women, and the path that led them to pursue their activities, are truly inspiring – and have nothing to do with wanting to appeal to men. Shapley portraits female athletes as what they truly are: remarkable athletes.

“I wanted a diverse range of athletes who represented different sports, body types, ethnicities, ages, and backgrounds,” Shapley told BOXROX. In the end, Strong Like Her features 23 athletes, including representatives from CrossFit, powerlifting, weightlifting, bodybuilding, and strongwoman.

Welcome to the #StrongLikeHer stage our next athlete, @danalinnbailey! DLB was the first IFBB physique pro in history and the first Ms. Physique Olympia. She stays busy with owning clothing line @flagnorfail, supplement company @runeverythinglabs, and @thewarhousegym — and lifting, of course, which she was introduced to by her husband, @killrobbailey. “I just followed exactly what he did,” she says. “I was benching, I was deadlifting, I was squatting — I was just doing whatever the guys were doing. Little did he know he would create a little monster.”⁣ ⁣ ?: @sophyholland⁣ ??‍♀️: @sheridanwardhair⁣ ?: @caitlinkrenzbeauty⁣ ?: @GalleryBooks/@SimonandSchuster

Yet the book resonates with everyday athletes too, as the benefits of being strong translate to everyone, be it an Elite athlete or an 80-year-old woman.

“One story I really found inspirational was from a woman I happened to meet in an airport on a layover,” Shapley recounted. “We struck up a conversation and she told me she found her way to a CrossFit gym in her 70s, after she had struggled to lift a bucket of kitty litter and wanted to improve her strength.

“When she started, she couldn’t get off the floor without assistance or do a single sit-up. By her 81st birthday, she was deadlifting more than 120 pounds. She had no previous strength-training background.”

With such positive effects, it’s a real shame that, to this day, the general population has ideas and expectations on how women (and specifically women’s bodies) should look like.

When you talk about being #StrongLikeHer, you have to talk about @strongwomankristinrhodes. The 2012 World’s Strongest Woman and an eight-time winner of America’s Strongest Woman, Kristin achieved a new world record earlier this month at @arnoldsports when she pressed a 180-pound monster dumbbell overhead. Although she started training for her sport later in life than many other athletes, the 44-year-old mother of three is only getting better with time. “What’s kind of mindblowing to me at this point is I just keep getting stronger—I’m kind of defying science,” she says. “With every year, I continue to get stronger, so I don’t even know where my max is going to be.”⁣ ⁣ bit.ly/stronglikeher⁣ ⁣ ?: @sophyholland⁣ ?: @sheridanwardhair⁣ ?: @caitlinkrenzbeauty⁣ ?: @GalleryBooks/@SimonandSchuster

“’Disgusting’ is a harsh word to describe anyone, and yet people who would never refer to someone who is obese or alarmingly thin or even slovenly as disgusting have no problem hurling that label at women with above-average muscle definition,” Shapley writes towards the end of the book. “Building strength seems to be an invitation for body commentary and even touching.”

Yet sports like CrossFit, which have popularised strength training for women, and books like Shapley’s, celebrating the achievements of women past and present, help pave the way towards a more inclusive culture that celebrates female strength.

“There are more women every day discovering the power of strength, and thanks to social media, it’s easier to find like-minded community and sources of inspiration,” Shapley said. “As people let go of preconceived notions about what women can or should do, they’re more likely to value and celebrate female strength.”

Exactly three weeks until #StrongLikeHer drops! Today’s featured athlete is @camille4wildcat, a former collegiate softball player at @cpmustangs turned competitive weightlifter. Camille was passionate about softball growing up, but it was difficult to excel because she was small and weak. In eighth grade, she signed up for a strength and conditioning program and could only back squat a PVC pipe with 5 pounds on each side. Now? She’s knocking on the door of 300 pounds. “Lifting weights has helped my mental state,” she says. “Your anxiety goes down because you’re so confident when you have X amount of weight on your back and you do a back squat and you’ve never done that before.”⁣ ⁣ ?: @sophyholland⁣ ??‍♀️: @sheridanwardhair⁣ ?: @caitlinkrenzbeauty⁣ ?: @GalleryBooks/@SimonandSchuster

Strong Like Her presents the awe-inspiring and untold history, entrusting readers to understand how we can better encourage—and celebrate—the physical power of women.

Filled with Sophy Holland’s beautiful por­traits of some of today’s most awe-inspiring ath­letes, including climber Margo Hayes, fencer Nzingha Prescod, endurance and ice swimmer Jamie Monahan, and many others, Strong Like Her presents strength in all its forms. It illuminates the accomplish­ments of storied female sports stars – whose con­tributions to society go far beyond their entries in record books – and is a book that should be read by both men and women alike looking for inspiration to get stronger.

Shapley puts the message perfectly into words in her introduction:

“As a woman’s belief in her physical prowess grows, it does more than improve how much she can achieve athletically—it also elevates her overall well-being, including emotional, social, and economic health, and these are all signs of strength to strive for. No longer is her body an object to be judged; it’s a vessel to be cultivated, and celebrated.”

GET THE BOOK NOW