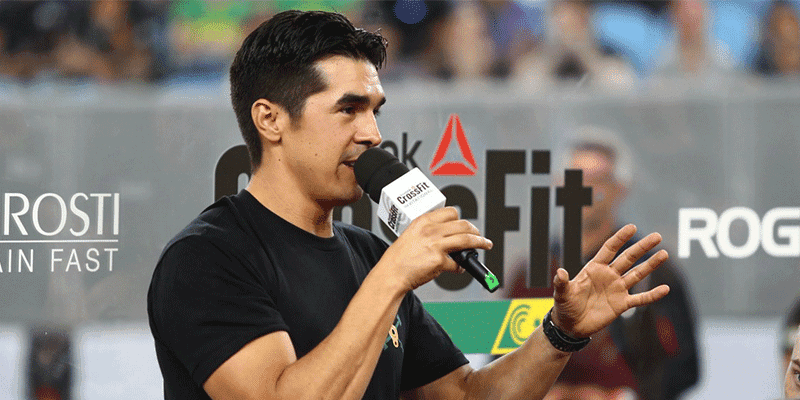 The mastermind behind the workouts, Dave Castro, programmed the events that individual, teams and age group athletes would be completing. On a series of Instagram posts, he explained – and seemed to rejoice in the upset caused – what the thoughts, idea and goal were for every event.

With the inclusion of National Champions, a new scoring system and the introduction of field cuts, the Games brought with themselves a new format and many possibilities.

Opinions on this year’s CrossFit Games sway two ways with little middle ground: spectators were completely sold by the changes or they hated them.

Castro shared some stats about the workouts, what the events were meant to test, if there were elements that worried him and ultimately how it all panned out.

“83 out of 131 women finished at least 1 round. 4 finished the event. @tiaclair1 had the fastest time – 16:56. @jgreenewod, pictured behind Tia, took 3rd on this event and would go on to take 3rd at the Games. @anniethorisdottir finished 6th on this event. And @sarasigmunds finished 40th on this event. Both Annie and Sara would eventually get cut after 6 scored events.”

“First cut was medium long in duration and technical in the athletic demands. Second cut was meant to be simple and fast. Yet still test a demanding body weight skill, The handstand walk, under fatigue.

“@mathewfras had the fastest time for the men at 5:37

“@jamesnewbury would finish 4th, @scottpanchik 6th, and @nohlsen 7th. Each would finish all events in the Games.

“Overall third place finisher, @bk_gudmundsson would finish 30th on this event. But starting with the sprint event he would not finish lower than 4th for the rest of the weekend.

“On the women side Danielle Brandon would have the top time at 6:16. @brookewellss would finish strong with second. @tiaclair1 would finish 12th in this event. She would also finish 12th on the sprint. Those were her lowest finishes across all the events”

“@bethanycf was able to grab the 8th place finish in this event by taking @sarasigmunds by .06 seconds.

“First time rucks were used at the Games. Format was identical for men and women. They ran the same course and added the same weights for a final total weight of 50lbs. The winning female time of 27:09 by Emily Rolfe @emily_rolfe19 would have placed her in the 32nd position of the 50 male athletes. Beating male athletes such as @jasoncarroll89 @bsmit13 and @scottpanchik. I enjoy having events where men and women can be compared on the exact same test, especially in the same heat. That theme will be repeated a few more times at the Games in 19.

“Other notable moments in this event was the dominant performance by @hogberglukas and of course, @mathewfras bag falling out of his ruck.

“Overall happy with the inclusion of this event.”

“This photo captures the essence of the intent of this test. Pain, delivered quickly.

“The first event was 15-17 minutes the second was sub 8, third was long, over 25, so we needed something fast at this stage. And with a bite. This accomplished that.

“Some athletes griped about different sleds being easier to push than others. The issue, I believe, was not finding the optimal height to push on the handles for the specific athletes build/size to maximize the efficiency of the push.

“Or you can go with their excuse, their gear and synthetic turf was not the same as everyone else.”

“The last time we programmed a time priority workout out the Games was in 2009. Showing the race and having a dramatic finish is challenging with this format. I thought there was a chance it could be a dud in terms of the show. As a test I knew it would be solid. But without the dramatic sprint across the finish line, especially as a final coliseum event on Friday, that had me worried.

“Once this event was underway It was during this moment, seeing @mathewfras and @nohlsen battling it out, that I knew it was fine. Their race was one of the most exciting events of the Games this year.

“But for me the most memorable event of this years Games, and possibly my all time favorite moment across all the Games, was the performance put on by @karipearcecrossfit. She not only beat all the women competitors but her score was higher than all the male athletes. She beat @nohlsen by 18 reps.”

“I was happy with how this played out. Many were not.”

“We originally tested this as 2 ascents per round but that made this a very different test. Way longer. I think the 1 rep version was appropriate for the time domain we were shooting for.

“We don’t often do the split movements but I really like the thought and focus that went into these movements since they had to alternate each rep. And the two different dumbbell movements kept the athletes thinking from the first set of 10 to the next set of 10.

“This was classic CrossFit.

“The top male time was held by eventual male champ @mathewfras at 15:36. A minute faster than 2nd from @nohlsen.

“With a reduced field to 10 it made plugging in a format like this with a heavy element an easy day. 1 lifter at a time. Weight slowly goes up. Lift until you can’t. One person remains and wins it all. This type of event would have been too time consuming to run with 20 and almost impossible to run with 30-40. Again in this super visual fan friendly way.

“Earlier in the day @hosstremblay told me that @mathewfras would win and @scottpanchik would take 2nd. I blew it off because I don’t really get into the event like that as it’s happening. But he was right. That’s exactly how it went down.

“On the women’s side it was cool to see @amandajbarnhart power cleaning the first few bars. But even though she is listed almost 30 pounds lighter than Amanda @tiaclair1 would once again take the victory. With a clean of 265.”

“This format allowed us to compare team competitors times to individual athletes.
for example…

“@richfroning would have finished 4th on this event in the men’s field with a time of 28:12. @mathewfras finished with a time of 29:04. (Point Froning.) The finish of the two aussies @tiaclair1 and @mattmcleodd was another highlight of mine.”

“Ringer 1 was a sprint type event with minimal rest followed by another sprint event. When testing fitness across a multi day event you are also indirectly testing recovery. With IE10 and IE11 we were testing an extreme end of short duration recovery. Perform at max output. Rest a minute or so, and go again at a new task at max effort.

“@katrintanja proved to have this realm locked in as she won both IE10 and IE11. @mathewfras finished 2nd on 10 and won 11. This was the point when he regained the leaders jersey.
“In testing nobody broke up the toes to ring. That was the intent. Those should be done unbroken and it comes down to how bad you want to go into the pain cave on the assault bike.”

“When IE10 and 11 were put to paper they both had the same rep scheme of 21-15-9. In testing IE10 with those reps was the time domain we were looking for if not a little too fast. But IE11 with that rep scheme was a little too a long for what we wanted. We then adjusted the reps on IE10 to 30/20/10 and halved the reps for IE11 and that played nicely into creating these two tests with similar time domains for the efforts with a nice rep scheme that played off of each other.

“As mentioned in the last post, @katrintanja won this one too.”

“About 11-12 years ago I was teaching at a L1 seminar at CrossFit San Diego. During our lunch break I talked to some of the other staff about an idea I had. I wondered if any CrossFitters could finish those 3 benchmarks in under 10 minutes. I postulated that being capable of that accomplishment would be a great standard for a well rounded elite CrossFit athlete. Back then a few people played around with it. There is a YouTube video of @crossfitrobo taking it on.

“For a number of reasons it never made it into the Games. Until this year. And as the final. I was very pleased with how it played out and how it capped off the 2019 Games. Every year we have a lot of ideas for good tests and events and often times they get pushed off to the next year, sometimes a few years later, sometimes never. In this case it was a decade later.”