8 Highlights of the 2021 Rogue Invitational

This weekend was packed with highlights of athletes showcasing their fitness levels in Texas. 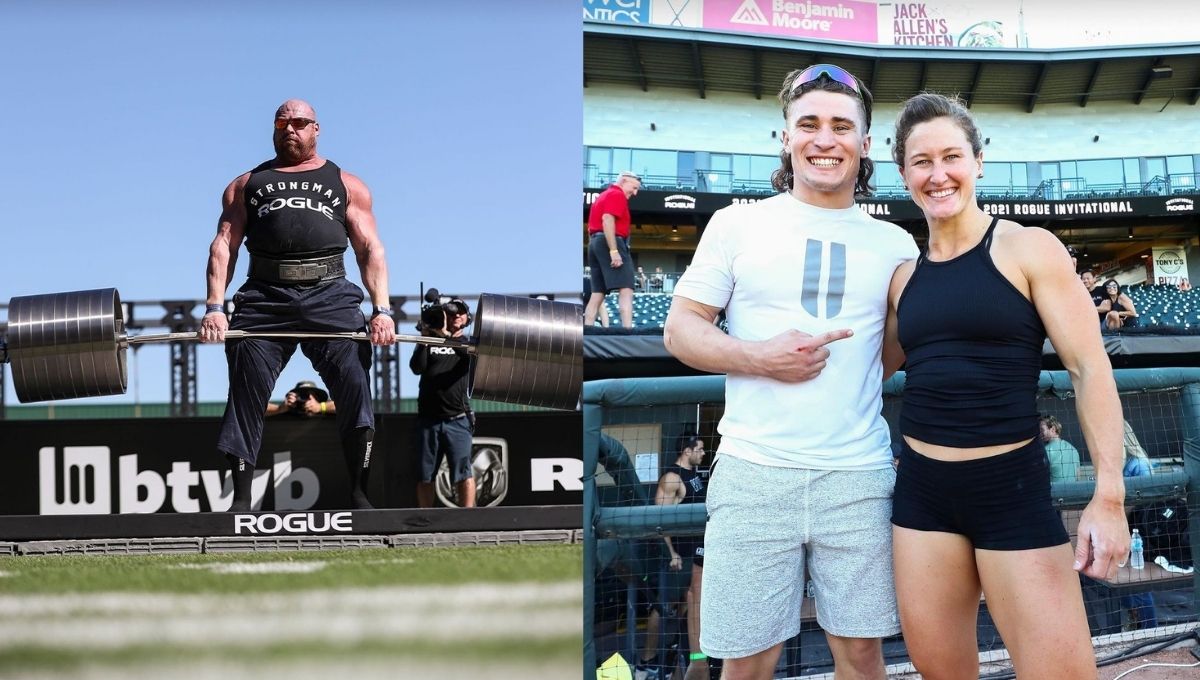 Although it was only three days of events, the 2021 Rogue Invitational was packed with excitement and cheering from the crowd. If you missed the action, BOXROX has narrowed it down to 8 highlights of the competition.

The list does not comprise only moments from CrossFit athletes, but also the Legends and the Strongman events.

Every single athlete that competed this weekend took home a percentage of the Rogue Invitational’s prize purse. Click here to see how much each athlete won at the competition.

Highlights of the 2021 Rogue Invitational Highlights

Justin Medeiros was roughly unknown before 2020’s CrossFit Games but took home a 3rd place, rookie of the year, and now he is the Fittest on Earth and to solidify his reign he has also won 1st place at the Rogue Invitational.

Just like during the CrossFit Games, Medeiros has proven how he is a well-rounded athlete, as he won only one event at the Rogue Invitational, but always finished top 5 in every workout.

Three Rogue Invitational has existed and Tia-Clair Toomey has won all of them for the women division. However, her latest win was not without bumps. At the end of Day 2, she was 15 points behind Annie Thorisdottir.

In the first event of the last day of the competition, Toomey took over the leadership by placing 2nd in the “Chipper” and finished off the day with an event win and ultimately 1st place overall.

Jeffrey Adler was seen as one of the strongest athletes on the competition floor until Guilherme Malheiros showed up.

During the Games, Malheiros easily won the snatch event that put him under the spotlight. Now, at the Rogue Invitational, he consolidated his fame by lifting 367lb.

Malheiros did not even attempt his third lift, although he was allowed to, already knowing he would come out on top at the end.

Adler came in 2nd managing to lift 260lb in the event.

And it seems like Annie Thorisdottir 3rd place at the CrossFit Games this year was not a fluke or a result of luck. A year after giving birth to her firstborn, she finished 2nd at the Rogue Invitational.

Although 2nd place is a feat in itself, Annie Thorisdottir was sitting at the top of the leaderboard with only two events to finish and, for the first time in a long time, people questioned if Tia-Clair Toomey was going to lose a fitness competition.

We can’t wait to see what Thorisdottir’s future tournaments will look like.

“The Duel” was perhaps the best event for people watching the Rogue Invitational. It was a genius twist to make the competition more… well, competitive. The event looked like this:

For a 90 seconds time cap, athletes would have to do 60 heavy double-unders, 3 squat snatches and one sandbag load to a platform (strongman style).

And perhaps the best highlight of this event was the final in the men’s division between Guilherme Malheiros and Sam Kwant. By mere milliseconds, Gui Malheiros won the event after looking like he was not going to take it.

6 – Strongman Events Was a Delight to Watch

The event started with a max deadlift! Could not have been better to decide who is the Strongman among the 10 athletes competing this weekend.

We have also seen the Cyr Bell ladder with a proper head-to-head competition, the wheel of pain, and the classic yoke carry, overhead log lift and stone over hitching post.

For people used to seeing CrossFit athletes showcasing their fitness, it was an absolute pleasure to see other types of athletes competing by lifting incredibly heavy weights with only one hand, or pushing a wood mechanism of 20,000lbs.

We hope this happens more often in the future.

Wearing the distinctive red shirts, athletes from all backgrounds took a turn to try to break World Records. And it happened.

Matin Licis, who ended up winning the Strongman competition, broke the World Record for Thor’s Hammer. He lifted the 300lb equipment with one hand.

Also, there was a Rogue Record broken for Dinnie Stone Hold. Josh Thigpen managed to hold the stones in the air for 31.77 seconds.

The world record for Dinnie Stone Hold, however, still belongs to Mark Haydoch of Lancashire, who held it for 46.30 seconds in 2019.

CrossFit athlete Carolyne Prevost also broke a Rogue Record after doing 67 reps of deadlift at 225lbs. Oh, and she eld the previous record as well.

8 – Legends and the Backbone of CrossFit

CrossFit legends did not compete against one another and provided more of an entertainment show for the spectators at the Dell Diamon stadium in Texas.

That is because it lined up two legends competing side-by-side as a team against other teams of legends. It was more of an exhibition rather than a competition, but nevertheless, they came in and reminded everyone why they are regarded as Legends of CrossFit.

Catch Up On the Action