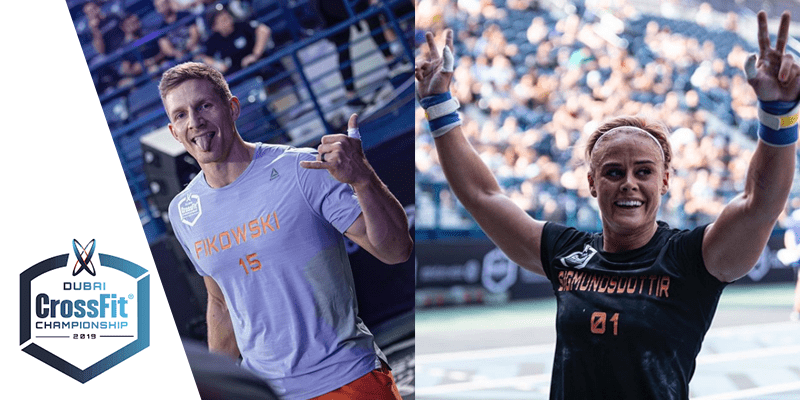 The Dubai CrossFit Championship wrapped up on Saturday December 14 after four exciting days of competition and 11 events. Workouts featured exciting scoring methods and unusual movements like flying push-ups, deck squats and A jumps.

Sara Sigmundsdottir and Brent Fikowski took the overall wins, with the first showing a strong  performance throughout and the second taking the lead away from Roman Khrennikov on the last day of competition.

On the Team’s side, Misfit P10 Performance, comprised of two teams from the 2019 CrossFit Games, dominated the competition and are the fourth team to secure a spot at the 2020 CrossFit Games.

Katrin Davidsdottir, who was set to compete as well, decided to sit out this Sanctional due to a back injury.

Sigmundsdottir, one of the sport’s female icons, continued her season strong with a second Sanctional win. The Icelandic athlete won the 2020 CrossFit Open, the Filthy 150 in Ireland three weeks ago and now the Dubai CrossFit Championship.

She was followed by Slovak athlete Karin Frey and Sam Briggs, who was still looking for a CrossFit Games invitation following a major penalty and a foot injury in the Open.

The Engine will receive a ticket back to the CrossFit Games, given that Sigmundsdottir and Frey have already qualified through the Open.

Although Fikowski did not lead until the final day, he had a strong last day and overtook Russian Roman Khrennikov and held off a surge from fellow countryman Patrick Vellner.

“I think all week I sort of had a confidence that things would play out in my favour whether that was a podium spot or a first place spot. I just really felt like I had a lot of internal momentum, and I just felt like my fitness was almost building instead of deteriorating. So I just really tried to focus on each event, and obviously you want to win but it’s largely out of your control,” he told the South China Morning Post.

The CrossFit Games invite: officially, with the CrossFit Open leaderboard set and invites sent to teams who have won Sanctionals (and have confirmed their rosters), the Dubai CrossFit Championship’s Games invite should go to Brent Fikowski; he’s not a National Champion and not within the Top 20 finishers of the Open.

Where things get complicated: ranked 32nd worldwide, Fikowski finished the CrossFit Open four spots bellow blue line, which is drawn right after the 20th non-national champion athlete. If an athlete within the blue line declines their individual invite, their spot is backfilled to the next athlete.

There are three athletes above the blue line who plan to compete on a team, meaning these spots would be backfilled down. Brandon Luckett just qualified by winning SouthFit with Team Odd Squat and Roy Gamboa has qualified with MisFit P10 Performance. Assuming Rich Froning qualifies with Mayhem Freedom, the blue line drops three spots.

Rounding up: if Fikowski was to get an invite to the CrossFit Games through the Open, the Dubai CrossFit Championship invite would go to 9th place finisher American Tola Morakinyo.

Misfit P10 Performance dominated the competition winning six out of 11 events and finishing second in every other one.

The team was formed by a mash up of 2019 CrossFit Games teams, with Travis Williams and Roy Gamboa – the male pair of Don’t Stop – and Taylor Williamson and Andrea Nilser – the female pair in OC3 Black.

Many workouts were kept secret until the last minute, with athletes not knowing the details of any of the final events until the day of competition – or even how many workouts awaited them.

Events two and three were joint events with an interesting scoring format. The event consisted of decreasing running sets with 1km BikeErg sections in between. The score for Event 2 was the total time it took athletes to complete a workout, while the score for Event 3 was the slowest 1km bike.

The first event on Saturday, event 8 of competition, was a “DFC Original” and consisted of Flying push ups, Deck squat and A jumps, all of which were programmed on the first year of the competition (before it became a Sanctional).

For Time: Fastest is Better

Have a look at all the workouts here.

Watch all the action here: