What is Total Immersion Swimming, How Does It Work (Plus 3 Workouts)

Total immersion swimming will increase your swimming endurance, making it a great cardio workout for any athlete. 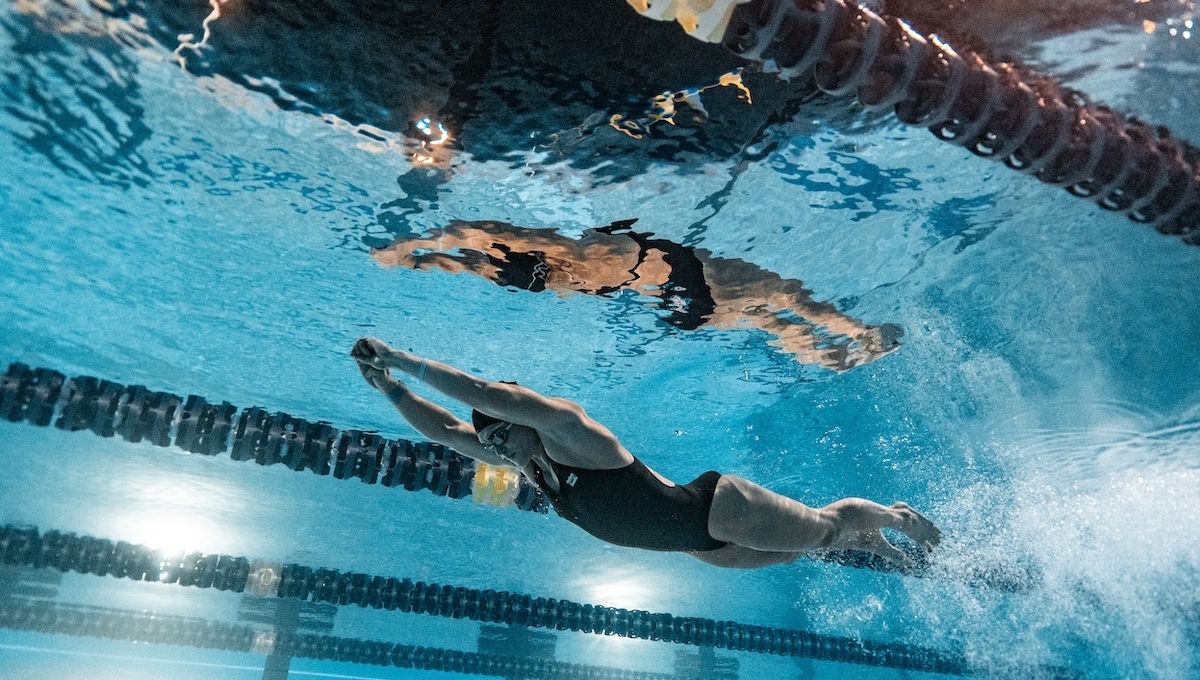 Swimming is a pleasure and one of the best sports a person can do to lose weight, develop muscles and increase their conditioning. It is the jack of all trades in sports. And there are many methods of swimming, but have you heard of total immersion?

This article is aimed at those people who wants to swim better, more effectively and, possibly, without wasting too much energy. So it is suitable for beginners who want to improve their swimming skills, people curious about this technique, and can even be valuable to CrossFit athletes who will need to swim in their next competition.

In the end, we included 3 CrossFit swimming workouts for you to try out.

What is Total Immersion?

Total immersion is a technique created by Terrence James Laughlin, an American swimming coach. The first time the world ever heard of total immersion was when he founded his program in 1989 in the U.S. Merchant Marine Academy, in New York.

Laughlin’s also published a book titled Total Immersion: The Revolutionary Way to Swim Better, Faster and Easier in 1996, which turned the technique mainstream across the United States and later the world.

Laughlin’s total immersion technique focuses on a ‘fishlike’ style of swimming in which the swimmer keeps most of his body under the water, instead of flapping the arms on the surface of the water. The idea is to keep movements to a minimum, but with high efficiency to move through the water without getting tired.

How To Do Total Immersion?

The technique can be broke down into three different principles: balance, streamlined, and propulsion.

With the right balance, the swimmer keeps their shoulder, legs, hips and head at the same height and as close to the water surface as possible, but still underwater. You should try to shift your weight forward and bring your hips up to maintain the legs at a similar height as your entire body.

In the streamlined part of classes, the swimmer positions one arm forward to provide guidance in which the body will follow. This reduces water resistance and there will always be one arm in front of the body underwater.

Lastly, the swimmer learns how to maximise propulsion, but Terry Laughlin believes that propulsion requires a far greater effort to the human body than avoiding water resistance. For him, doubling the speed is 8 times as strenuous, therefore only a fraction of the energy used to swim should be spent on propulsion.

What does that mean? It means that you will not be using your arms and legs non-stop as you normally would. Movements should be as simple, controlled and calm as possible. You must do a coordinated double leg kick at a specific time and rotate the trunk in each arm stroke.

Keep your head down as this will help you have your head aligned with your spine and, therefore, your entire body should be horizontal.

Use your foot to turn your hips. As you know now, total immersion focus on less energy spent for a longer length swam. Your feet should not be utilised to propel you forward, but rather to help you rotate your trunk and hip so you can drive your next arm forward. This allows you to conserve so much energy.

Focus on your shoulder roll will help you propel yourself forward. The placement of the arm ahead of you keeps you balanced in the water and creates a vacuum for you to slide through and continue going forward.

Think of total immersion swimming as swimming on alternating sides, not on your stomach.

Penetrate the water with your fingers angled down. The downward water pressure on the arms will bring your legs up and ease the water resistance.

Rotate your body, and not just your head, to breathe.

Practice on a pool that is short and shallow as this will force you to focus on technique, rather than length.

As it sounds revolutionary, total immersion also came under scrutiny by people around the world.

One of the main criticisms towards total immersion is that it just not look natural. Although that is precisely what its founder wanted it to be (to swim like a fish, not as a human does), some argue that total immersion teaches people wrong concepts, such as to keep your head fully underwater.

Another big problem of total immersion is that it is simply slower than traditional swimming. There is a reason why you do not see swimmers at the Olympic Games utilising the total immersion technique.

It does not seem like this style of swimming is compatible with waves, given that you have little room to breathe with your head being fully submerged.

Pros and Cons of Total Immersion

At the end of the day, there are reasons to choose to practice total immersion and reasons not to.

Some say it is a good alternative for triathletes who are not the best swimmers because it will save them energy when they are in the water. But those triathletes, if they are competing, probably will not make up the distance lost during total immersion compared to someone who can swim fast in a triathlon.

You could argue that CrossFit athletes in the 2020’s Games could have tried the total immersion technique during the event Swim N’ Stuff since it took a toll on the legs.

Total immersion can be excellent in the pool, but not very efficient in open waters. A swimmer in cold freezing water, for example, would need to keep the head above the water, and not submerged.

It depends on your goal. Why are you swimming?

Now that you know all about total immersion, here are 3 CrossFit workouts with swimming.

This swim is a bit longer than most workouts, which can be great to practice total immersion and, perhaps, compare with a partner who is not doing the swimming technique.

Toe touches are when you lie on your back and feet straight up in the air and you reach with your arms utilising the core to touch your toes.

At the end of this workout you will have swum 1500 metres. Notice you will have to do air squats, pistols and lunge jumps, which is incredibly demanding of your legs. What better way to not deplete the energy on your legs? Total immersion.

Is This The Smartest Push Pull Legs Routine?

Awesome Leg Workout with Dumbbells at Home You Should Try