The Fittest Have Been Crowned: Who Won the Teenage 2021 CrossFit Games?

After three days of gruelling competition the fittest Teenagers have been crowned. 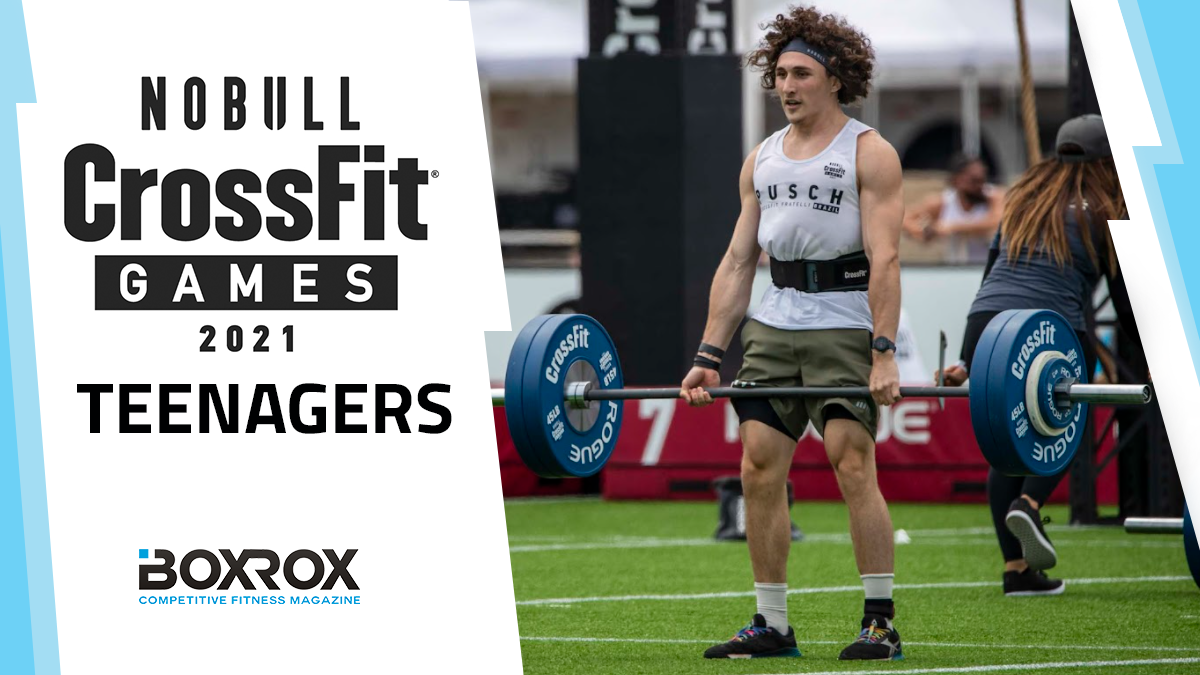 The CrossFit Games have come to a close for athletes in the Teens 14-15 and 16-17 divisions. New and old faces have been crowned, and the field showed just how strong the future of the sport is looking.

Two events awaited the 14-15 age division, while 15–16-year-olds faced three workouts. This wasn’t the case for all the field however, as competing athletes in both age divisions were cut in half going into their final event.

Following a short season for Teenage athletes in 2020, which ended with the Age Group Online Qualifier instead of the CrossFit Games, it was impressive to see the levels of skill, power and endurance these athletes display at their young age.

Here’s your final day recap, but make sure you catch up on day 1 and day 2 if you haven’t yet.

Coming into the final day, Ty Jenkins (Boys 14-15) had a 40-point lead over Isaiah Weber, having finished all five previous events within the top 5 and earning two event wins.

The race for first place on the Girls 14-15 division was much closer with two events to go; Lucy McGonigle edged out Olivia Kerstetter by five points with 390 at the start of the day. Third place Hailey Rolfe was only 15 points behind her too after two days of competition.

Nate Ackermann (Boys 16-17) came into the day with a solid lead over 2019 champion (Boys 14-15) David Bradley, having finished four out of six events in 2nd place. Emma Lawson (Girls 16-17) also held a healthy lead of 50 points over Olivia Sulek going into the final day of competition.

The Fittest Teens on Earth have been crowned:

Given that no age groups competed in the CrossFit Games last year, fresh faces topped all three podium spots in the 14-15 division. Without event wins on day 3, Ty Jenkins did enough to defend his first-place spot on the Boys 14-15 division. In the same age division, Olivia Kerstetter just went and snatched two event wins to secure a gold, having started the day in second place.

Emma Lawson, who competed as an individual at the Atlas Games Semifninal, secured a first-place finish in the Girls 16-17 division and was followed by 2018’s Fittest Girl on Earth (14-15) Olivia Sulek.

The CrossFit Games continue for Individuals and Teams tomorrow Friday, July 30 through to Sunday, April 1.

This triplet with decreasing reps in the muscle ups was the opening workout for the final day of competition for Teens. Both the girls’ and boys’ fields competed side by side, giving viewers a good feel of the overall standings.

David Bradley, who was ranked second coming into the event finished ahead of leader Nate Ackermann for his second event win of the competition. Only half the field managed to finish this event within the time cap, showing the effect the competition has had on athletes’ bodies.

Sophie Shaft, who competed in American Ninja warrior this year, picked up her first event win edging out Anine Linnea Keen Hansen by five seconds. Just like with the boys, only half the field finished this event.

The very similar workout to the division above, except it determined which 10 athletes would advance to the final event.

Isaiah Weber secured his first event win just ahead of Gustavo Pusch with a time of 11:28.52, while Olivia Kerstetter snatched her third event win and closed the gap between her and Lucy McGonigle

Going though to the final were:

Event 8 was key for the 16-17 age division, as it was the last workout before the field got cut. Being an AMRAP, it was an unusual workout for the CrossFit Games.

David Bradley secured his second event win of the day and fourth overall with 113 reps, second place Rökkvi Guðnason was three reps behind. In an incredibly close race Olivia Sulek won Event 8 by 1 rep, snatching her second event win for the weekend. Just behind her was Emma Lawson, who is also vying for first place.

The athletes who qualified for the final were:

The first time in the coliseum for Teenage athletes was saved for the last event, which was a similar version to event 4 for Individual athletes.

Olivia Kerstetter, who is coached by Games veteran Jacob Heppner, started to build up a lead going into round 3 and would not be caught by either the boys’ or girls’ fields. She finished in an impressive time of 06:14.86 and her two event wins today were more than enough to earn her the title Fittest Teen on Earth.

Rj Mestre was the boy’s winner in a time of 08:27.16 but it was second place Gustavo Pusch who secured a podium spot with his performance in this last event.

Given that no age groups competed in the CrossFit Games last year, fresh faces topped all three podium spots in the 14-15 division.

Coming into the coliseum for the first time, the race was close for the podium spots for the Boys and Girls in the 16-17 division.

The thrusters looked heavy for most athletes, but not for Paulina Haro, whose barbell lied ahead of everyone’s – boys and girls – throughout the workout. The Mexican National Champion dusted the field and her performance secured her a spot on the podium.

Elijah Subiono secured his first event win on the final workout and was followed by Nate Ackermann, who did not win any event through the Games but was the most consistent athlete with five 2nd place finishes. They were the only two athletes to finish this final workout within the time cap.

Note: All current point values and standings are unofficial and subject to change.