What you should (and should not) be done when it comes to building those glutes. 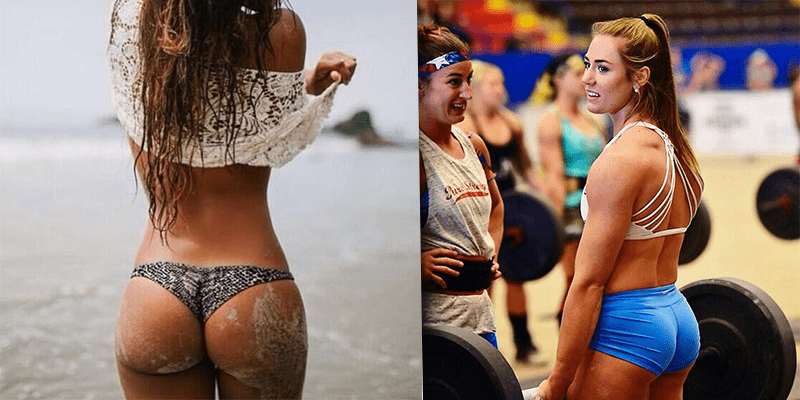 These glute exercises ranked worst to best will give you a great overview of what you should, and should not, be doing in your training.

They have been selected, ordered and explained by Jeff Cavaliere from Athlean X.

“We start as always with the criteria for inclusion on this list. First, these exercises for glutes have to be capable of being overloaded over time. This is key for progressively building muscle. They also by that note have to be capable of delivering hypertrophy and not just strength. Finally, all of these glute exercises have to be safe to perform. As you’ll see, some don’t hold up well to this requirement and are therefore lowered down in the rankings.

We start as always at the bottom of the list in the worst exercises for glutes category.

“First up is the prone hamstring curl. Remember, since we are grouping hamstring and glute exercises together due to their shared function, this variation of the curl deserves the lowest spot. It’s not that it isn’t capable of building bigger hamstrings. It’s because it often times brings about low back pain in the process. Especially when there’s a better option to come, this deserves the lowest spot on the list.”

“Next, we have the heel press. This bodyweight glute exercise is one that is limited in both range of motion and overload capacity. There are many better and therefore cannot be ranked highly.”

“The Step Mill is one of the most popular forms of cardio, especially for those that are looking to build their butt and do exercises for better glutes. The problem is, the motor is doing all the work. Pass and move onto to a superior alternative later on.”

“Finally, the leg press (even when performed with the feet high on the plate) is not nearly adequate for delivering glute gains. The range of motion is horrible and the overload is far from optimal. Much better glute exercises await.”

In the better category, we improve on the isolated kickback to this time include some additional weight resistance.

“The standing cuff kickback is a good way to up your exercises for glutes and deliver better results. The DB reverse sprinter lunge will mimic the position of the chest and thigh that you would see at the bottom of the leg press but do a much better job resisting the extension at the hip on the way up, allowing it to rank deservedly higher.”

“The DB single leg RDL is great for exposing right and left leg muscle imbalances but the balance requirements could compromise the hamstring and glute muscle results that you’ll see which leaves it lower on the list.”

“Taking another step up in the glute exercise rankings into the better still category we find the cable single leg RDL as a slight improvement over the dumbbell because of the added stability we get from it in the frontal plane.

“The Seated hamstring curl machine is a far better option if you want to use a machine to build bigger legs. The direction of force takes the hip flexors out of the exercise and therefore saves your back.”

“The KB Swing, while an amazingly athletic exercise for glute development can become more of a challenge to your conditioning rather than building bigger glutes.”

“The almost best category includes the incredibly powerful squat (this time being recommended in a low bar position for targeting the glutes more effectively), the standard two legged version of the barbell RDL, a leaning forward step up, pull throughs and of course the underutilized glute ham raise.

“All of these exercises for glutes and hamstrings are capable of delivering stronger bigger glutes and are worth a spot in your glute workout.”

Best of the Best

“Finally, the best of the best glute exercise is the barbell hip thrust. Both the mechanics of the exercise as well as its ability to check all three criteria laid out make it the best exercise for glutes. Be sure to watch why for all the details.”

Muscles of the posterior chain

The posterior chain is a group of muscles located at the backside of your body. They are responsible for helping you maintain good posture. They also play an important role in helping to keep your spine healthy, along with supporting your hips and pelvis.

Gluteus minimus is a small muscle that originates from the ilium, sacrum and coccyx. Its fibers run downward and medially to their insertion into the iliotibial band (ITB). It also inserts into tensor fasciae latae (TFL), which is a larger muscle located on the lateral thigh.

The gluteus maximus, or “glutes,” are the largest muscles in the body. They are a powerful hip extensor and stabilizer of the pelvis and lower back.

Glutes are important for sports like running, jumping and throwing because they help you to keep your knee aligned with your hips when you land and push off during movement. They also help with everyday activities like walking and climbing stairs by keeping your pelvis stable while moving your legs in different directions.

The erector spinae are a group of muscles that extend from the sacrum to the skull. They function primarily to extend and rotate the vertebral column, but they also help with spinal flexion, lateral flexion and stabilization.

The semitendinosus, or BTB as it’s called in its anatomical shorthand, is a muscle located on the posterior thigh. It’s one of three muscles that make up the hamstrings—the other two being biceps femoris (long head) and biceps femoris (short head).

The tendon of the semitendinosus attaches to the top of your tibia (shinbone) and runs down through your knee joint. The muscle belly originates from your ischial tuberosity—the point where your pelvis meets your backside—and inserts onto the upper part of your tibia. Its primary function is extension at both ends: flexing at its origin, extending at its insertion point.

The muscles of the posterior chain are a key to physical health and well-being.

The muscles of the posterior chain are a key to physical health and well-being. These muscles support the spine and pelvis and are responsible for stabilizing the body during walking, running, jumping and lifting. The glutes are also involved in hip extension (moving leg behind you) as well as internal rotation (turning leg inwards).

In addition to helping you move with ease through everyday life activities like walking or bending down to tie your shoelaces, these muscles also play an important role in sport performance by providing speed and power through acceleration movements such as sprinting or jumping.

As we can see, there are many muscles that make up the posterior chain. The gluteus maximus is a large muscle that helps with hip extension.

This movement is essential for activities such as running and jumping, but it’s also important in everyday life because it strengthens your lower back and core muscles.

The hamstrings help control knee flexion and rotation of the femur about its axis; therefore, they are involved in movements such as walking downhill or climbing stairs—or simply getting out of bed in the morning!

Finally, the erector spinae group consists of three pairs of muscles that extend from either side of each vertebrae all around your spine (hence its name).

They work together to keep your posture upright while supporting heavy loads placed upon them by gravity or other external forces acting upon us during daily activities like lifting weights at gym class or carrying groceries home from the store after shopping all afternoon long!

Use the ranked glutes exercises above to make the best decisions about which movements to include in your training.