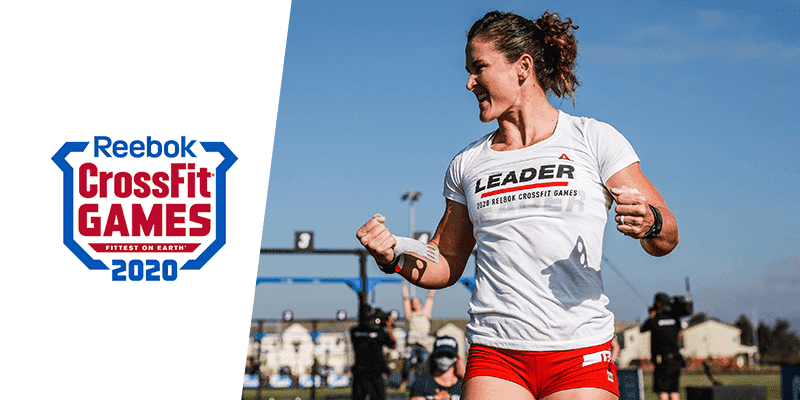 The 2020 CrossFit Games are well underway and the leaderboard has shuffled dramatically, but two names have stuck to the top from start to finish.

Tia-Clair Toomey and Mat Fraser started the day leading the competition and head into the last day of the Games in first place. They both won all four events of the day: Toes-to-Bar/Lunge, Snatch Speed Triple, Bike Repeater and Happy Star.

The 2020 CrossFit Games finals run from Friday October 23 to Sunday October 25 in Aromas, California. There are a total of 10 athletes competing for the title Fittest on Earth, the top 5 male and top 5 female competitors from Stage 1, held online.

How Will Scoring Work for the 2020 CrossFit Games Finals?

Heading into Day Three of the 2020 CrossFit Games Finals this is what the leaderboard looks like:

Day two of the 2020 CrossFit Games started with the Toes-to-Bar/Lunge workout, the 6th event of the weekend.

The event was just over four minutes long and pretty much every athlete went unbroken. The major hurdle in this event wasn’t fatigue or grip strength, but wet grass, which made the lunges trickier than they should have been.

Chandler Smith: “Don’t worry @crossfitgames, we found the divots! Part of the Demo Team’s responsibility is showing the athletes what not to do and rest assured, I’ve got that part down pat! “ pic.twitter.com/hYbLLRqwig

Tia Toomey kicked off day two of competition with a win. Dave Castro seemed impressed at her tactics on the last set of toes to bar; Tia left her kettlebells right under her rig and had quick access to them on the final set of lunges.

A couple of the male athletes copied this technique.

On the men’s side, Noah Ohlsen lead the event until the final set of toes to bar, when Fraser moved forward and stayed ahead.

Event 7 of the 2020 CrossFit Games Finals made for an exciting watch.

All 5 athletes will begin the first round, performing 1 snatch at each of the three progressively heavier barbells. After each round, the slowest athlete will be eliminated, while the remaining athletes will rest 2 minutes before beginning the next round.

After a quick event 6, the top 10 moved on to the Snatch Speed Triple, which was even quicker.

The first round for the women was almost unbelievably fast, yet Haley Adams struggled on the last bar, missing a rep, and was eliminated. The other women crossed the finish line almost at the same time.

It became clear there was no room for error on this event; if you missed a rep, you were out.

The speed didn’t decrease for round two, and Tia Toomey crossed the finish line first again. This time, it was Kari Pearce who failed her last rep and was eliminated.

While the third round was slightly slower than the first two, it was still impressive. Toomey won all three rounds and earnt her fifth event victory for the weekend.

Davidsdottir struggled with the last bar, but after a deep breath and a determined look she got under it and secured her third place for the event. Brooke Wells finished second.

The men missed more reps than the women during this event, but their lifts were just as impressive.

Noah Ohlsen and Justin Medeiros missed their last lift on round 1, but ultimately it was Noah who was faster on the re-try and Medeiros who got eliminated.

Fraser was just a tenth of a second ahead of Adler on round 1, but he dominated round 2, crossing the line over twice as fast as the rest of the men.

Fraser dropped the last bar for the first time in the event on the last rep, which opened a window for Adler to step ahead. Yet Adler missed the last lift too and Fraser got his second attempt, securing with it the event win.

He was followed by Adler, who finished second and Kwant, in third place.

After two speedy events, it was time for athletes to face 10 rounds of bike sprints and legless rope climbs.

Event 8 of the 2020 CrossFit Games, the Bike Repeater, is a throwback to a 2014 Regionals event, where athletes faced essentially the same workout, but swapped running with bike sprints.

The women took the competition floor first and Toomey took the lead from the start, Davidsdottir close on her heels. The Icelandic athlete was strong on the bike, yet Toomey made up ground on the rope climbs and pushed ahead.

As the halfway point neared, Toomey had established her lead and an exciting race was forming for second place: Davidsdottir, Adams and Pearce were all even going into the fifth round.

Adams pulled away from the field coming into the 8th round and at this point, still with the lead, Toomey lapped Wells. The Australian athlete hung to the overall lead and secured with it her third event win for the day.

On the men’s side transitions were fast and smooth; most of them didn’t get off their bikes during the dead turns.

An exciting race between Fraser and Medeiros started to form during the first two rounds. The rest of the field wasn’t too far behind either, they all finished the second round within five seconds of each other.

By round four Fraser had built a lead with Medeiros close in second. The rookie went up the rope climbs at impressive speed, but the current leader made up ground on the bike sprints.

Coming into the seventh round, Adler caught up with Medeiros on the bike, starting a neck and neck race for second place.

Within one round, Adler dropped Medeiros and got close to Fraser, overtaking the four-time CrossFit Games champion at the start of their last round.

With only half the bike sprint and a rope climb to go, Fraser showed a new gear and pulled ahead of the Canadian athlete, creating a gap and securing his third event victory for the day. Adler crossed the finish line a mere two seconds after him.

Jeff Adler 🇨🇦 was quick on the rope, but @mathewfras 🇺🇸 hit the gas 🚲 💨 pic.twitter.com/y7VDZs9fXu

Athletes went back to the Ranch for the final event of Day Two of the 2020 CrossFit Games. The last event of the day wasn’t announced until 20 minutes before it was set to start: Happy Star.

Athletes had to run up four different hills in four different directions – hence the name – and, unlike most CrossFit events, both the number of reps and the weight went up with each round.

Athletes will begin by running a loop up and back down the hill, followed by a round of 5 burpees and 5 thrusters. In the second round, the athletes will run a different loop up the hill, then complete 7 reps of each, this time with a heavier thruster. Each round the run course will change and the reps and weight will go up.

Wells starts leading the workout, reaching the top of the hills first and starting the rounds of burpees and thrusters ahead of all women for the first three rounds.

She was overtaken by Toomey at the start of the final round, but the lead didn’t last long as Wells sprinted past the leader up the hill.

Toomey caught up during the burpees and, going unbroken on the last 11 reps of thrusters, crossed the line in first place. The three-time CrossFit Games champion swept day two of the 2020 CrossFit Games clean, winning four out of the four events and stacking seven out of nine victories.

Pearce snuck into second place as Wells struggled with the last set of thrusters and Davidsdottir followed in third.

Kwant lead the men’s competition on the first round but was quickly caught by Fraser at the start of round two. Coming into the burpees on round three Fraser had a clear lead.

The four-time Fittest Man on Earth started on his last hill sprint as all men were still working on their thrusters and, like Toomey, swept day two of the 2020 CrossFit Games with four out of four victories, stacking eight out of nine event wins.