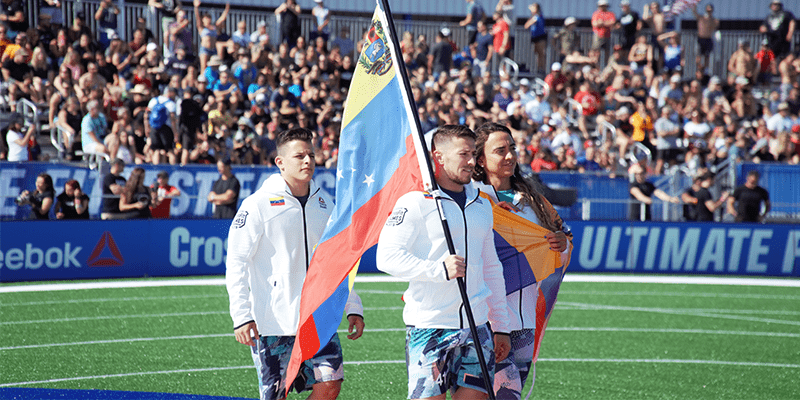 Officially, day one of the CrossFit Games went on until late afternoon, but not many were there to enjoy the final event.

Pretty much all spectators had left the Alliant Energy Center as Omar Martinez took onto the competition floor to complete Event Two of the biggest CrossFit competition.

His lone figure pushed through with a setting sun; no athletes to compete against, no real warmup and no big crowd to cheer him on. There was no live broadcast as he moved from the rower to the kettlebell shoulder-to-overheads and finally the handstand walk.

“Mentally it was horrible. To start with I wasn’t prepared for it,” Omar told BOXROX. “I went to do it because my family was there watching, but the desire to do it wasn’t there. My mind didn’t want to do it; I was completely disappointed in the competition.”

Event 1 of the CrossFit Games was straightforwardly called ‘First Cut’ and eliminated almost half the field of athletes. From 142 males that started the event, only 75 made it to the next stage.

Venezuela’s National Champion came to the CrossFit Games with a 110th worldwide Open ranking and finished the first event in 56th place. However, a scoring mistake erroneously cut him from the field, marking him as having completed one less round than he actually had.

When the leaderboard came out, he was ranked 100th and wasn’t allowed into the briefing for the second event, which came and went with Omar still waiting for an answer to his appeal from the Scoring Team.

Five hours after the appeal, Omar received a sincere apology from the Scoring Team, was taken to the North Park and told he was allowed to complete Event 2 – by himself – there and then.

“I had no other choice but to do it,” he said. “I couldn’t really warm up. I rowed 200m on the rower, tried the kettlebells but it was 3, 2, 1, go and I went to do it, just one judge and myself on the competition floor. When everything had finished, without knowing how it was, without knowing the details.”

“At least they let me do it, let’s look at the bright side, I could live that little experience,” he continued. “But it wasn’t ideal, I wasn’t in the same conditions as everyone else.”

Waiting to hear back from his appeal after Event 1, Omar didn’t have a chance to relax, rest, eat or even warm up properly. He said he wasn’t aware of the movement standards as he hadn’t been allowed into the event briefing when it happened.

His score after Event 2 was added to the leaderboard on Thursday evening and his performance ranked him 67th overall. Only 50 athletes went through the second cut.

Omar went back the next morning to appeal the circumstances of his workout.

“As optimistic as I might be, I didn’t come here to win. I came here to get to know the competition, to live my dream [of qualifying]. […] I came to be next to all my idols against which I always wanted to compete.

“I’m not here to win, I’m here to be in that stadium, with [the elite athletes], competing against them. So everyone who’s watching me around the world can say: that’s my coach, that’s my brother, that’s my friend – he made it.

“I couldn’t do that because no one saw me. I was hidden after the competition, doing [the workout] by myself,” he told BOXROX.

He asked to be allowed to do the third workout, even if his judge didn’t have a score card, just to be able to live that experience. However, after a sincere apology, his request wasn’t granted.

“I understand that it’s human to make mistakes and that there’s nothing to be done,” Omar concluded. “I’ll come back next year better prepared. […] I hope this serves them as an experience to learn from so that next year, and the years after that, the competition becomes better and fairer.”

This wasn’t the only mishap in scoring at this year’s CrossFit Games. French athlete Willy Georges was cut from competition after going through re-outfitting on Friday night after appeals and late changes to the leaderboard came through.

We have reached out to CrossFit and Head Judge Adrian Bozman for comment but haven’t received an answer yet.