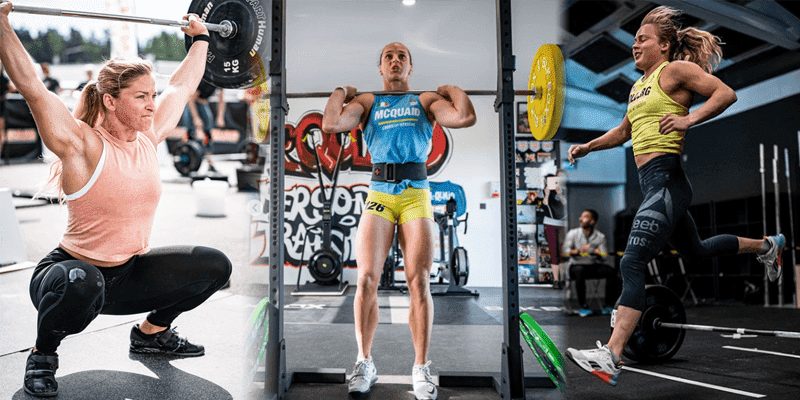 When it became clear it would be impossible to hold the 2020 CrossFit Games as usual, CrossFit altered their plans and moved the competition online.

Following the global pandemic, travel bans, mass event cancellations and other unexpected circumstances, CrossFit HQ announced the cancelation of the Masters, Teen and Team divisions for the CrossFit Games. National Champions also had their invites revoked and only 30 male and 30 female athletes were granted the opportunity to compete this year.

Once the decision to hold the event online had been reached, qualified athletes arranged their competition venue, gathered the necessary equipment and measured their running course. BOXROX spoke to Andrea Solberg, Camilla Salomonsson-Hellman and Emma McQuaid to learn about their experiences competing at the online CrossFit Games.

“It was good, it felt very professional having the floor laid out, start, finish line, and your own judge,” said Fittest Woman in Ireland Emma McQuaid, who qualified by ranking 7th in the worldwide Open and finished the Games ranked 19th. Athletes were briefed on the competition setup, ensuring distances and conditions were the same for all competitors.

Because she qualified early on, Emma had a big off season and worked a lot on weaknesses. “I would say the only thing I lacked going into the weekend was the top-end intensity from not having trained with people regularly,” she said, referring to restrictions set by the global pandemic. She equalled her Front Squat PB and beat her max Handstand Hold.

“My favourite part was having all my friends and family share the Games weekend with me, and to do all the WODs in my own gym,” she said. She will most remember Event 7, the last one, and the insane atmosphere in her gym.

“The highlight was the final event,” echoed Swedish four-time CrossFit Games athlete, Camilla Salomonsson-Hellman, who secured her highest individual Games finish with a 23rd place this year. “I will remember the full setup as a whole. It was a cool way of competing and so many more people were cheering me on than when I’m competing at the real Games in the U.S.,” she said.

“It didn’t feel like I was doing the workouts by myself because I was never alone,” Camilla said. “I had great people around me all the time that really pushed me.”

“At this level it’s just super hard to predict where you’ll end up with what you did, so it’s better not to focus on that at all and just focus on the things you can control,” Camilla said, referring to competing remotely and the results on the leaderboard, which weren’t published until hours later in Europe. “That’s exactly what I did this weekend. I had a great time and knew it would be over in a second – and I was right. So I’m really glad with how my mindset worked this weekend.”

CrossFit Games 2020 —————————— This weekend has been something else. Since I started with CrossFit I never felt the support the same way as I’ve done this weekend. Since the competition format allowed us to compete from home, I really felt that me and my team were the ones holding the wheel. And we did it so well! 🙏🏼 The margins are supersmall and as we speak I’m currently sitting in 23rd overall which means that the tickets to Aromas are going to five other amazing athletes. @crossfitgames really is the true test of fitness. My opponents are unbelievably fit. My mind was set to win, but if I allow myself to get to dissapointed with my ranking I think I’ll miss out on the important stuff that is crucial to collect from these kinds of overwhelming events in life. ——————————— There are so many to thank, instagram wont even allow me to tag all of you. Maximum 20 people, so unfair 🤷🏼‍♀️🙄🤣 So for now, I’ll just write, thank you to the ones that had helped me prior, during and after this event in any kind of way. My heart is full. ❤️

A post shared by Camilla Salomonsson Hellman (@camilla.salomonsson) on Sep 20, 2020 at 2:19am PDT

Andrea Solberg, who qualified for her first CrossFit Games this year through the Filthy 150 Sanctional, competed from CrossFit Oslo alongside Kristin Holte. She finished 27th on her rookie year and said she didn’t mind not having previous CrossFit Games experience to compare this year’s competition to, so she enjoyed it just the same.

“I am happy with my effort!” she said. “Some events went better than expected, some less. Highlights were events 3, 4 and 7, and I’m a little less happy with events 1, 5 and 6.

Andrea finished event 6 in 7th place, holding a handstand for 1:53 minutes and beating all the male times. She was, however, expecting to hold the handstand for over two minutes, as that is what she always does. “Unfortunately I had a little shut down during Nasty Nancy, so my body was not ready to hold that handstand hold for as long as I am used to, but I still tried my best,” she said.

“It has been a long season, so my body was tired, but I am happy with what we got out of it and really happy to complete my first CrossFit Games,” she continued. “The most memorable part was the atmosphere on Friday afternoon during events 3 and 4. The crowd were electric, and me and Kristin fired each other up to perform even better than we expected! We also put on some really fun music, which made it even more special.”

My first CrossFit games✔️ It’s been a ride this season. I’m happy with what I have learned, I’m happy for all of the opportunities this have given me, and I’m happy with my effort this weekend. Some events went better than expected, some less. A lot to learn. This is only the start, so I’m even hungry for more the next coming years 🔥 Most importantly I’m grateful for the team and supporters around me, I would not be able to do what I love without them❤️ 📸 @lifeofmalm #crossfitgames2020

“We could not have asked for a better competition and a better community than what we got at CrossFit Oslo,” Andrea said. “Kristin and I are really grateful that we were able to do this together with our team, not being alone in the situation, and motivate each other.”

The Norwegian athlete will still work towards another qualification, hoping to experience the original format in upcoming years.