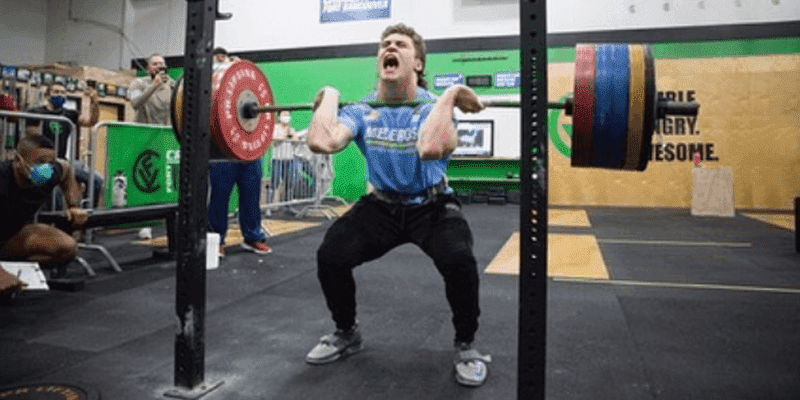 Justin Medeiros is a 21-year-old CrossFit athlete and one of five men to have qualified to the 2020 CrossFit Games finals.

Medeiros, who currently trains in CrossFit Fort Vancouver with coach Adam Neiffer and is majoring in Kinesiology at Boise State University, is the only athlete in the CrossFit Games Finals field without any previous Games experience.

The 5’8” athlete qualified to the Games early in the season through the Filthy 150. In a dominating performance, where the Games rookie finished all workouts in the top six (with exception of the Trek Run), he showed he’s a new force to be reckoned with. Proving that his place in the CrossFit Games finals is well-deserved, Medeiros finished Stage 1 of the Games in 3rd place, only eight points behind veteran Noah Ohlsen.

The American athlete has a background in wrestling and football, and started training CrossFit around the age of 13, improving year on year.

Who is Justin Medeiros & His CrossFit Games Story

While Medeiros might not have CrossFit Games experience, he has come very close to qualifying before. He competed in the California Regional for the first time in 2017 and finished 15th, he was 18-years-old.

He trained with the confidence he could make the top five the upcoming year but with a Regional realignment, he competed at the West Regional – in a field with more experienced athletes – and finished 14th. Justin didn’t know how he’d stack up against the big names and was beyond excited to have performed as well as he did.

He was sure he’d make it the following year, but Regionals were replaced by Sanctionals. Justin competed at the Granite Games and was in a qualifying position up to the final workout, which revealed a weakness in him and meant Justin finished 10 points and one place away from qualifying for the 2019 Games.

This year however, fans around the world will get to watch him compete face-to-face against the likes of Mat Fraser, Noah Ohlsen, Samuel Kwant and Jeffrey Adler.

He has already proven he’s got what it takes by front squatting 437 lb (for 3rd place) during Stage 1 of the Games, as well as finishing second during Nasty Nancy and fourth on Awful Annie. However the CrossFit Games Finals play out, Medeiros has already impressed both fans and fellow competitors.